Winfrey Point, the Park Board that hates parks,

“Lake front property is for rich people. Any fool knows that.” So Mr Hip&Trendy businessman spouted off while in line at Good2Go Tacos, blithely oblivious to the irony of ordering organic local meats and veggies while favoring a parking lot at Winfrey Point, planned by the Dallas Arboretum and approved by the Dallas Park Board. But he does illustrate a point: plans are afoot to take the east side of White Rock Lake away from the wide spectrum of citizens who use it in favor of those who like their nature prettified and pricey.

Dallas Arboretum opened a huge exhibit and has plans for a mammoth children’s center, yet has no long-term parking plans to go with them. Someone in city planning approved those permits. Could a school or business gotten away with such incompetence? Not a chance. Last time the Arboretum expanded they consulted the neighboring residents. But now, why bother? They have the park board in their pocket and together they make plans behind closed doors with developers without the messy process of citizen opinion.

Using the ample nearby commercial parking lots on Garland and shuttling Arboretum attendees is a hassle, takes planning, costs money. That’s the same sentiment of the large charities, corporations and businesses that put on runs and other events at White Rock Lake. They want the parking lots and garages as well.

Now documents are surfacing that show the Dallas Arboretum has designs on much of White Rock Lake’s eastern shore. Plans are to install a two-story parking garage and turn Winfrey Point building into a restaurant. East Lawther would become a major two-way road to connect them. The hike/bike greenbelt corridor would go away, along with the Little League fields and the prairie patches where ground birds nest. And what about the White Rock vision plans that lake groups spent years toiling over, plans that speaks of prairie restoration, wildlife management and increased recreation options of all income levels of citizens?

The ArBORGetum marches on. Dallas Arboretum has already been ceded control of the buildings at Sunset Bay just north of Winfrey. For that matter, the Bath House Cultural Center is in the crosshairs of developers who’d like it to make it into a wedding and party palace. Now that the Dallas City Council has killed the possibility of Texas Land Steward designation for White Rock Lake, major parcels of land at the  Bathhouse Cultural Center, Big Thicket, Stone Tables, and Celebration Tree Grove are also now game for developers.

The whole Winfrey Point issue is symptomatic of the general lack of enthusiasm the Dallas Park Board has for parks. Would your church or charity group like to so a small festival at a Dallas park? Pony up several hundred dollars in special-event fees first. Make up that money from fees paid by vendors at your event? Nope, not allowed. Unless you are a large wealthy group. The park board’s commitment to freezing out all but corporate-sponsored events is clear.Its members are not arborists and botanists and recreation experts. They’re primarily people who want political careers.

Is the Winfrey Point open area truly a piece of Blackland Prairie, an ecosystem of which less than 5% remains. Yes, it is, as is most of the east side of the lake where a dairy farm was once. It is unplowed land. The original seed bank of native grass seeds remains in the soil, which is why it has been given designated status by Texas Parks & Wildlife. You can mow it, park on it, pave over it, but once you remove all that and give it a few years the prairie will rise again. We should take heart.

Lake front property is for rich people. Within a decade or so the east side of the lake will be prettified as wealth dictates, with users reduced to picturesque hikers and bikers passing by on the trails, their sweat a safe distance away. That is unless the lake’s thousands of users speak up loudly and often with persistent vigilance, and unless the media, from the main daily newspaper to the East Dallas publications, wakes up and investigates all these closed-door shenanigans. White Rock Lake is a public lake created for the public. Let’s keep it that way. 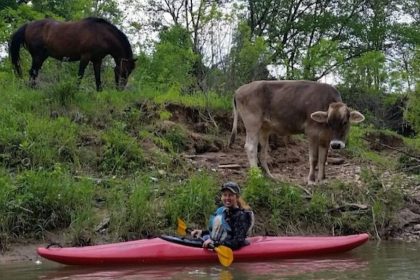