Are these on your hiking bucket list: ancient limestone bluffs, prairies and post oak savannahs, upland oak mottes and bottomland forests, a wide lazy river with marshes and a tiny magical island? How about seeing bison and prairie dogs in their home domain? No need to travel far. Fort Worth Nature Center and Refuge, located at 9601 Fossil Ridge Road in Fort Worth, has it all.

Boasting more than 3,600 acres along the northwestern tip of Lake Worth, FWNC is bigger than many state parks and one of the nation’s largest municipal nature centers. Over 20 miles of natural surface

trails lace through its various terrains. Recreation is low key — hiking, birding, canoes and kayaks — with concern for wildlife a priority. Development is minimal, allowing an experience of what the area was like before Fort Worth suburbs engulfed it.

Visionaries made it happen. Lake Worth arose in 1914 by damming the West Fork of the Trinity River to serve as a primary source of water for Fort Worth. The city purchased acreage on the sensitive marshy intake end, an area that also fostered plentiful wildlife, to reduce the possibility of pollutants from development and industry. Persistent prodding from citizens, including Margaret Parker and the Fort Worth Audubon Society, led to the creation of the 380-acre Greer Island Refuge and Nature Center in 1964. Within a few years, the name became Fort Worth Nature Center and Refuge and expanded to near its present size. Now the nonprofit Friends of the Fort Worth Nature Center & Refuge raises funds and oversees much of its operations.

A Refuge for Wildlife 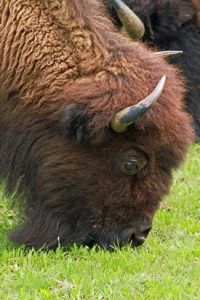 The bison don’t care, not about the cars passing by 20 yards away, nor the burly photographer who aims his large telephoto lens at them. Not even about the father whose young son squeals in delight or me with my face plastered to the fence to get a better look. They continue doing their bison thing, wading in a shallow pond, munching on reeds, before taking a midday heat break in the willow grove. Probably wouldn’t even be impressed to know they were recently designated our nation’s official mammal.

Miles of quiet, low-speed, blacktop roads wind through the park. They trace the riverbank, dip through lowland trees where the air is dank with humidity, arc across the bluff tops where acres of wildflowers bloom in response to recent rains. Frequent signs remind park goers to drive slowly. Evidence of spring floods lingers along Shoreline Drive. The beloved Marsh Boardwalk is down for repairs, and the Riverfront Trail is a boggy sinew of mud. On this quiet, overcast day, with storms brewing not all that far to the west, wildlife venture out even at midday. On the Fossil Ridge Road, a buck pauses grazing to look my way.

Back on Shoreline Drive, a grizzled guy in a pickup cruises slowly, peering intently into the woods, looking like the usual poacher that plagues Texas back roads. Then he points a large, long lens out the window to capture a large woodpecker drilling bugs from a massive bayou pecan. Cars both directions pause for the photographer. It’s that moment we all know well, when wildlife and scenery merge to take your breath away. It’s the reward for long periods of awareness, when you subsume yourself to the environment, no longer asserting your human presence. Then nature can reveal itself.

Fort Worth Nature Center and Refuge has earned many commendations. In March of this year, FWNC was designated a Lone Star Legacy Park by the Texas Recreation and Parks Society. The honor is bestowed only on parks with a deep connection to Texas and their community. The park must have historic features, unique plant and animal communities and have endured fives decades or more to become iconic.

1971 – Greer Island Trail designated as a National Recreation Trail by U.S. Department of the Interior. Honors exceptional trails that contribute to public health, recreation, and conservation. 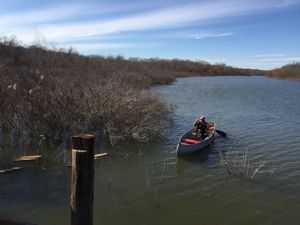 Occasional small parking lots tag to the side of Shoreline Drive, at times no more than a wide spot in the road. Some are for trailheads, where small SUVs disgorge families and nature-loving hikers ready to take on the day. Bigger ones feature ramps for canoes or boats. People stand around and swap river info: how hard the flow, where the waterfowl are lingering, which kayaks and oars do the best in slow, strong waters like these.

At one spot, there is nothing but a 10-yard trail to a bench, seemingly placed for one reason: to view the river. So I oblige. The West Fork eases into the northern tip of Lake Worth, spreading out in marshes and wetlands, erasing borders between river and lake, water and land. Birds thrive amid the sun-warmed shallow waters rich with reptiles and fish for herons, amphibians, and moss for ducks. It’s fledging season for songbirds and shoreline trees occasionally explode with worried calls as babies attempt their first flights.

The broad, slow-moving West Fork responds to the southern wind, setting up a chattering of small waves that move counter to the flow, yet the water always stays its course. It’s quiet enough to hear the river sing. It serenades the trees and reeds and overhead Sun, its placid waters mirroring the vast sky of thin rippling clouds. Time spent on the river shapes you, its metaphors so profound and unrelenting. It is the ever-present moment, always different and always the same, ever bound for union with the greater sea. 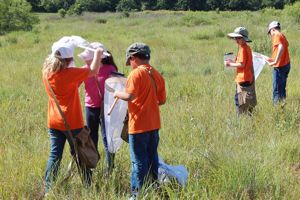 Greer Island is an island of sorts, connected to the Lake Worth shoreline by the narrowest of dikes that barely rises above the water surface. A brisk wind kicked mist onto the rocky path flanked by hearty stands of poison ivy and its box elder lookalike. FWNC began its existence in 1964 as Greer Island Nature Center and Refuge. Birder and University of Dallas science professor Warren Pulich, along with his Fort Worth Audubon colleagues, plotted the first trail. Tread by excited children for more than 60 years, this year it was renamed the Margaret Parker Trail for the late lifelong FWNC supporter.

In the early 1960s in North Dallas, Churchill Way Park was the place for me. It was mostly well-groomed picnic grounds and playing fields along a sprawling slope heading down to White Rock Creek. But at the rocky top of the hill, woods were allowed to grow. Through it ran a network of trails, never mapped, never named, made by neighborhood children like me. It was impossible to get lost on the trails since it was so small, but that’s just what we did. When you’re less than four feet tall, it was like a wilderness. I marveled at the wild grape and the beautyberries. It felt like the Earth could nurture me.

The trails of Greer Island Trail evoke those feelings. Dirt paths wind over small steep slopes, leading down to the waters and up to the island crest. They twist and turn through the thicket woods, and something new beckons around every bend. There are promontory rocks to perch on, with vistas that make you feel like an adventurer. Running at full speed with a large stick in your hand is required, just as a boy did today, followed by his breathless father exhorting him to stay on the path and away from the nettle.

Hardwicke Interpretive Visitors Center perches on the ancient limestone ledge that flanks the river. A short limestone trail offers views of the river bottom and lake beyond. For tens of centuries, people have stood on this ledge and pondered the landscape. History echoes here, in the rocks and horizon. Or perhaps it’s the small caucus of schoolchildren, being herded somewhat successfully onto a bus. 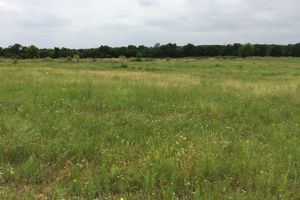 The short grass prairie along the nearby Fossil Ridge Road unfolds impressively down to a stream. It’s the west of the imagination, spiked with prairie yucca and stands of mesquite. The Prairie Trail off the Hardwicke parking lot leads down into the meadow. The mottled colors of a distance burst into vivid hues up close as wildflowers reveal themselves amid the little bluestem grass — star-shaped fuchsia blooms, a carpet of teeny white blossoms, winecup’s broad burgundy flowers and filigreed leaves, the bold waxy yellow blossoms of prickly pear.

This is the reward of the prairie, seen only by those who take the chance, who choose to be a participant and not just an observer of life, who experience and not just passively view. It sharpens your skills of observation, releases you from civilization’s tunnel vision. Startled birds rise from the meadow grasses, wheel across the sky and rest again. Bunnies burst from the scattered large clumps of switchgrass whose tall tawny seed heads from last fall contrast with the blue-green leaves springing up from the base, persistent and new. The open expanse of the Prairie Trail embraces possibilities and beauty rises from its midst. 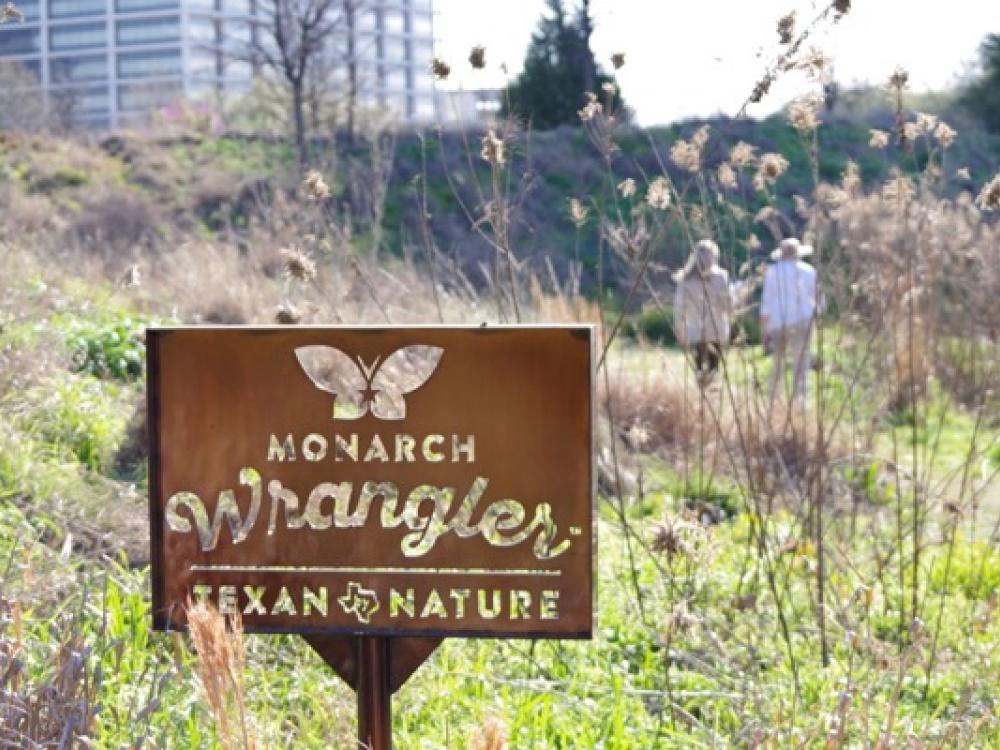