Grand Prairie — There are moments in this Kurios: Cabinet of Curiosities, the latest road show from Cirque du Soleil to tour to North Texas, that if you don’t scream you should check to see if you have a pulse. A dozen flying humans called Acro Net bounce over three stories high into the very peak of the big top. They execute ridiculously athletic moves in the air, then drop into a gigantic net-like trampoline, all while smiling like maniacs. Cirque should bottle and sell whatever superhuman force enables that. (See video above.)

Yet these flying men are creatures of the sea, costumed like Martians in George Méliès movies, with added fin and gill action to evoke sea creatures. Schools of performers in adorable fish costumes zip around beneath the net. A woman with a gramophone on her head warbles from atop a pillar while a live band plays in an arch at the rear of the round stage, spilling out lively French swing jazz that pulls off the miracle of keeping pace with the aerobic performers.

It’s the whole shebang, the total package, that pulls you to Cirque. The overwhelming sensation of performers in motion front, above and at times on all sides. Witnessing the thrill seeking and risk taking and impossible physical feats you have no hope of ever being able to do. You experience waves of music and sounds, nationalities and costumes, colors and patterns.

The show runs through March 26 under the blue-and-yellow big-top tents outside the Lone Star Park arena near the Verizon Theater at Grand Prairie.

But even the whole shebang can get boring in these days when Broadway and opera shows are fantastical productions with pyrotechnic lighting, mind-bending scenery, and astounding costumes. Cirque had been in a slump, with productions that dazzle, but smush into sameness. Can’t carry that too long when tickets are pricey.

Kurios changes all that. Rampant creativity abounds. The attention to sets and prop detail by Stéphane Roy is marvelously obsessive. Rather than wedge circus acts into a plot, Kurios creates a universe, and for a couple of hours attendees get a ringside view to watch how it operates. The Cabinet of Curiosities stage is Magritte meets steampunk and given a Wizard of Oz spin and more than a touch of Hieronymus Bosch surreal intricacy. Bridges and towers emerge from a mountainside boasting a vast, mysterious tunnel from which the Kurios world births itself. Set at the turn of the 1900s, gramophones and trains are a big theme, embodying the optimism of technology to lift all from the mundane. Costumes by Philippe Guillotel range from ‘30s swing and savoir-faire to organic contraptions and creatures.

There’s a primordial feel to Kurios and more than a touch of darkness. The Cabinet of Curiosities seems to be home to the forces that animate the human psyche. Obsessive attention to detail, like with the AcroNet costumes, and frequent references to well-known magical realms of fiction impart an impressive depth. Every movement is choreographed, down to the turning of hands and pointing of feet. There’s a commitment to humor and a sense that performers are honestly enjoying themselves.

Eccentric characters and phantasmagorical creatures amble about, but they have backstories and a Cirque logic to them, forming family groups that have their own reality. As the dapper steampunk imagineer of Kurios, the Mr.

Microcosmos (Karl L’Ecuyer) strides in his self-contained universe, His immense bathysphere-like costume evokes Nemo’s Nautilus of Jules Verne novels. But even he has a poetic creative side, his intuitive self, which emerges from his round belly in the regal form of 3’3” Antanina Satsura, one of the 10 smallest people in the world.

Kurios kicks off with a vigorous “Chaos Synchro 1900,” driven by Blue Man-type drumming by Loy Chatham, jaw-dropping on-the-move juggling by Gabriel Beaudoin, and a wildly choreographed promenade of all the acts and eccentrics to come. This creative explosion sends The Seeker (Anton Valen), who is the most huggable, grandfatherly scientist ever, off on his time and space crashing adventures. He’s aided by the ultra adorable yet vaguely menacing Kurios, human-powered robots that act out his imagination and set off more than a little chaos. Also swirling in his realm are Nico the Accordion Man (Nico Maixas), who’s sweetly helpful to all, and Klara (Ekaterina Pirogovskaya), the Telegraph of the Invisible, who takes in alien communications with her spiraling hoop skirt (or something like that).

Animating this universe are the usual Cirque acts presented with exceptional creative flair.

• The contortionists of Hypnotique emerge from a curio cabinet atop a gigantic mechanical hand that beckons to the future. Fluidly moving from one impossible Pilobolus-ish human construction to another, they morph into a creature with the many heads of a Hydra and the dangerous charm of a scorpion.

• Hand balancing can have limited charm, but in Kurios the chair-stacking feat emerges naturally from a dinner party bet about a chandelier. The diners discover a “Monde Inverse,” an identical upside down dinner party over their heads. The exceedingly well balanced (Andrii Bondarenko) scales a precarious mountain of chairs to complete the symmetry.

• In “Créature de Siam,” Roman and Vitali Tomanov perform feats of balance and strength while zooming about on aerial straps. Sometimes they move as one, other times separate and fly in breathtaking symmetry. They occasionally zip by mere feet above the audience heads.

• In “Gravity Levitas,” the massive Roman Terenshchenkos swings on a trapeze and flings his tiny wife Olena high into the air where she spins and tumbles before dropping into his arms, and off again in a constant flurry of aerial movement.

• More flinging of tiny people in “Wat U No Wen,” a banquine spectacle where pyramids of people rapidly form with much somersaulting and vaulting. Big gasps when the most petite member takes a flying trajectory impossibly perches at the top, the pyramid rapidly breaks down and reforms again even higher.

• “Steampunk Telegram” sends Anne Weissbecker off on an aerial bike and a series of maneuvers that make clever use of the spinning wheels and pivoting handlebars.

• Rola bola expert James Eulises Gonzalez Correa manages to stay atop a stack of rolling cylinders and planks—and doing it while swinging on a platform, which is an impossible feat of fluid balance.

Kurios shines just as brightly in the non-acrobatic circus acts.

• The shockingly fast and intricate yoyo artist Tomonari “Black” Ishiguro is gracefully presented and impressive even at a distance.

• A hot-air balloon emerges from the stage, serving as a projection screen for the lithe hands of Nicolas Baixas, who shadow puppets his way through a tale using only his bare hands. He’s surrounded by Cirque performers who operate

cameras and lights. The fusing of media and performances, showing the creation method and the end product simultaneously, was utterly charming.

• Argentinian comic Facundo Gimenez is a delightful and dapper mime, expressing his multitude of emotion desires with wide eyes and a sly smile. Like a maestro on mescaline, he conducts a miniature “Invisible Circus,” where the set moves but the acts are imagined.

• In another bit, Gimenez attempts to romance an audience volunteer and his plans are thwarted when he’s possessed by a t-rex, parrot, and a cat with hairballs and bad manners. He scampers about in a way that is screamingly funny.

While Cirque shows are known for utilizing live bands, this one is especially lively. The toe-tapping electro swing jazz has a French flair, though the vocalist is a Greek chanteuse Eirini Tornesaki, completing her role with this show. The score by Raphaël Beau, with composer duo Guy Dubuc and Marc Lessard (who go by “Bob and Bill”), moves the audience like a soundtrack, emphasizing emotional states while sparking smiles. 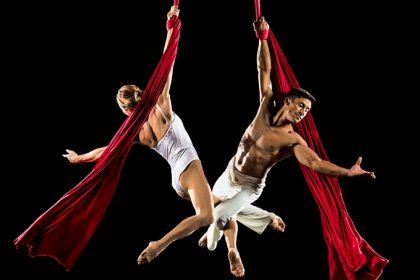 Playthings by Circus Freaks: Walking on ceilings and other fun

Dallas Solo Fest Review: …And Then I Woke Up