We just watched our farm blow away. There was nothing else we could do. Five acres of cucumbers withered in the heat, unable to blossom. No blooms, no cukes, no money.

It was mid-September and hadn’t rained much since June. In the garden, corn stalks crackled in the sparse wind, their kernels puckered, silks mere strands of dust. Peas dried on the vine. Grass lay flat on the ground. Buzzards patrolled the dry creek beds where cattle, weak from the drought, would go to die.

We hid in our houses like hermits, curtains drawn against the sun. When nothing grew there was nothing to do, and by noon it was too hot to do anything anyway. So we were surprised that day by a commotion at the door.

Standing against a sky so spotlessly blue you’d think it was paint, Elbert, our neighbor, insisted that a storm front was headed this way. He’d cut 40 acres for hay and most of it was bailed, unprotected in the fields. Now, he cursed, now the rains had come, threatening to ruin the grass it had almost ruined by not raining.

Off we went in his old flatbed truck. In the hay fields, we’d drive 30 feet, stop, and all fall out to load up, wrap our fingers around the wire bindings and hoist the bales onto the truck. Then we’d drive forward 30 feet and do it again. It was automatic after a few acres; labor machines fighting time and nature. Clouds began to fill the southwestern sky.

We unloaded bale after bale in low-slung, tin roof shacks that had blown down a time or two and been propped back in place. When the rafters started to get full, you couldn’t breathe anything but hay dust and pollen, and you couldn’t see the spiders and splinters laying in wait. We longed for the Sun that made it so hot and dry in the first place.

Thunder rumbled as the last bales went in. Elbert dropped us off at home. Too exhausted to make it up the steps inside, we lay on the hood of our pick-up truck, our hands frozen claws from hooking fingers under the bale wires.

We watched the storm coming across the fields; to the left, clear open blueness; to the right, the ominous sky. Tall, dark, turbulent clouds sat upon a layer of greyness. The setting sun reflected up through them formed angelic silver-blue edges etched brilliantly against the sky. Beyond these clouds was the white, where the rain was. All else was just a spectacle of weather, a ceremony for the coming of the storm.

Suddenly the wind turned nervous and wild, spinning the debris of dead crops and neglected harvest bags, carrying the whoops and hollars of elated neighbors, their voices like bells of a salvation homecoming. A crack of lightning sent the field animals to their dens; an owl swooped through the mist to catch them.

Then the rain came, first in large splattering drops, little clouds of dirt arising every time they hit the ground. Then it fell in sheets and rinsed out the dust that hung in the sky, turning leaves from grey to green. Water ran in twisting rivulets on top of the parched fields, until broad channels of muddy water flowed between the rows. The corn leaves became turgid, the grass stood erect.

We laid back and let it caress the dust from our faces, our fingers uncurled and we relaxed in the warm wash of the forgiving summer rain. 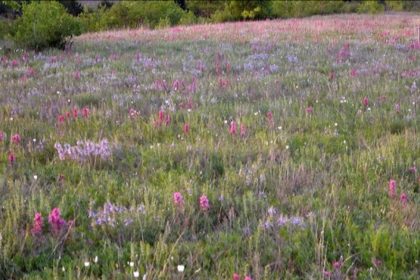 From the floods, a watershed of wonder