North Texas astronomy groups and planetariums offers a plethora of opportunities to learn about the night sky at both outside gatherings and indoor venues. Courtesy of the Franklin Institute.
By Amy Martin
July 29, 2015

Look up! Does nature for you include the sky? We live in the flat blackland prairie, where the sky is half the landscape. How far does the sky go for you? Is it limited to the rising and setting Sun, the Moon and its phases, and the bright Venus that penetrates the urban light haze? Or do you seek out the dimmer Mars, Saturn and Jupiter, and thrill when you can see the nebula that is the second star in the constellation Orion’s sword?

Nothing brings the space obsessed among us closer to the cosmos than nighttime. The darkness reveals the planets and stars, clearly signaling our status as cosmic citizens in a matrix of light. Following the lead of popularizing astro pioneers Jack Horkheimer, Carl Sagan, and Neil deGrasse Tyson, what compels star geeks is out there — the unknown of outer space, our final frontier. Each day brings awareness that we are on a planet with a moon, serenely orbiting a star that zooms around a galaxy, itself careening through an infinite universe of dark and light.

Are you one of us? Then meet your tribe at a monthly Dallas area star party hosted by the Texas Astronomical Society astro-geeks. Vance Bagwell chairs the Cedar Hill third Saturday star party. He and other enthusiasts bring their large sophisticated telescopes. See the rings of Saturn, the moons of Jupiter, and our own Moon’s craters. View deep sky objects like star clusters, galaxies and nebulae galore. Some nights you might even see a comet! But, said Bagwell, “It’s especially rewarding to see families show up with their telescopes. Kids and families that are excited about astronomy make me smile.”

The Cedar Hill star party at J.W. Williams Park has the best sightlines for all the Dallas County TSA gatherings. Viewers look southwest over thousands of acres of Cedar Ridge Preserve, Cedar Ridge State Par, and Joe Pool Lake, with the glare of DFW at their backs. Even a gander through binoculars reveals so much. Organizers even provided a Meteorite Petting Zoo at the July gathering, a mesmerizing spread of meteorites collected by Jeff Barton.

Bagwell’s dad was a U.S. Air Force electrician at Cape Canaveral, and the John F. Kennedy Space Center was just around the corner from home.

“I still remember playing with the large Atlas and Apollo model he kept in the living room.”

But the star passion didn’t fully arise until as an adult taking photos using a telescope captured his interest: “Astrophotography is my favorite special interest of astronomy, but visual observing is equally rewarding. There’s nothing like seeing it for yourself.”

See it for yourself at one of the Texas Astronomical Society’s observing events. All are free and begin at dusk. Call the Public Observing Hotline 214-800-6000 or visit the event website for complete information:

Fourth Saturday in Rockwall at The Shores Park

Above, a Vixon telescope for sale at the UT Arlington Planetarium gift shop.

Get away from Dallas for darker skies. The University of North Texas’ Rafes Urban Astronomy Center, located on the northern outskirts of Denton, hosts a first Saturday star party. It’s ultra cool to have working astronomers on hand. You can also enjoy shows in the planetarium. Admission charges vary, with the very young admitted free.

Nobody in North Texas gets quite a serious about stars at the Fort Worth Astronomical Society. Members have access to a private 600-acre nature preserve 70 miles north of Fort Worth. But you can also join the monthly star parties, open to the public, at the Fort Worth Museum of Science and History, hosted by FWAS and Noble Planetarium staff. These also come with planetarium shows and have variable admission charges.

The Planetarium at the University of Texas at Arlington offers a large number of planetarium shows on their 60-foot dome screen, plus occasional live stargazing events.

If you yearn for a less astro-nerdy approach and simply want a casual guide to the night sky, look for the occasional night walks held by area nature centers on the urban outskirts such as Lake Lewisville Learning Center and Fort Worth Nature Center.

High-tech astronomy and physics exhibits make up the Expanding Universe Hall in the Perot Museum of Nature and Science in downtown Dallas. Hours of fun, seriously.

The space exhibits at Fort Worth Museum of Science and History may not be as snazzy as Perot’s, but the displays in the Noble Planetarium foyer are quite satisfying, including a large meteorite and a Manned Maneuvering Unit that propelled astronauts around in space.

Above, the Noble Plantarium at the Fort Worth Museum of Science and History. 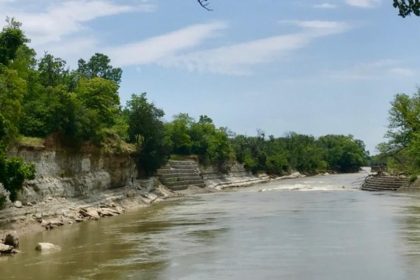 The Folly of Force & Mosquitos