In this first installment, we meet a woman whose passion for Texas and its history saved a prairie from urban encroachment. 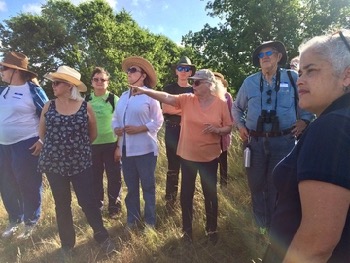 Susan Roberts marches across the Mathews Cartwright-Roberts Prairie, trailed by a dozen grassland groupies who hang on every word. I am one of them. Feisty and opinionated, she strides confidently, a long white ponytail swinging out the back of a ball cap. I totally want to be her in ten years.

Roberts has Texas deep in her genes. Her ancestors include a scout for Andrew Jackson in the Mexican America War, a pal of Stephen F. Austin and the largest landowner in state of Texas, back when land was granted in leagues. Family papers reside in the Dolph Briscoe Center for American History in Austin.

Also in her family tree is Paul Mathews, whose eponymous prairie in Hunt Countywas saved for posterity by a Native Prairies Association of Texas campaign last year.

For Roberts, family history and the history of prairie are “hand in hand.” Her family roots are as deep as the native grass roots beneath her feet. Her 200 acres of Blackland Prairie outside of Terrell looks much as it did when her grandfather roamed it as a young man.

“He called it his sanity. He came out every day.”

Participants in the Third Annual Northeast Texas Prairies Tour, presented by the Blackland chapter of Native Prairies Association of Texas in June, are lucky. Access to this private prairie is infrequent. About four-dozen people spill out from the bus, pause for a moment with awestuck expressions, and head toward their bliss.

Watch this video panorama of the Mathews Cartwright-Roberts Prairie. By Amy Martin.

Some strike out for a pond in a low swale. Roberts used to endure trespassers who cut fences and drove their pick-ups across rare prairie plants to fish in her pond. So she allowed it to fill in, forming prairie wetlands that foster unusual species.

Geology freaks lope down the slope to the gilgais, raised formations that occur over centuries as the clay soil shrinks and expands. Unlike the more common circular gilgais, these stretch linearly like low earthen waves.

The rest of us follow Roberts like puppies, peppering her with questions. She teaches about  her four types of soil that foster a diversity of native grasses and forbs rivaling The Nature Conservancy’s Clymer Meadow. 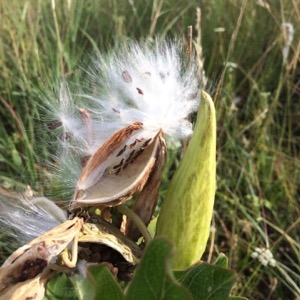 The swollen pods of antelope horn milkweed (Asclepias asperula) open and spill out dandelion-like silken seeds that disappear on the breeze. We stop to investigate the showy, almost silvery, rattlesnake master (Eryngium yuccifolium), with its stiff yucca-like leaves and spiky ball seed heads on tall stems. Roberts recounts the discovery of American aloe (Agave Americana) colonies and how “the smell of the flowers is so sweet, it just sweeps up prairie and hits you.” 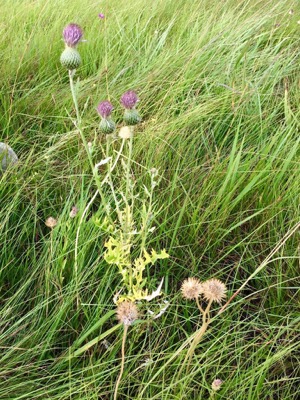 Standing hip-deep in big bluestem (Andropogon gerardi) and Indiangrass (Sorghastrum nutans), enmeshed in networks of plants and fungi unchanged for thousands of years, Roberts motions to the houses to industry that encircle her property. Development pressure “is an absolute nightmare,” says Roberts.

But tides are shifting. Pointing to an Oncor high-power transmission line marching across a corner of her land, Roberts tells how the electricity transmission giant cooperated to change plans and follow existing gas lines to minimize prairie damage: “I can not say enough good things about Oncor.”

With determined pride in her voice, Roberts adds: “I’ve just recently got the city of Terrell to see this prairie as an asset, as history,” referring to the city’s new master plan. Developed by a LEED-certified designer, she says “He appreciated a good prairie when he saw it.”

The plan dictates that Matthews Cartwright-Roberts Prairie should be protected from development pressures and given more municipal support, along with the Walter C. Porter farm, where Texas A&M’s AgriLife extension programs began. 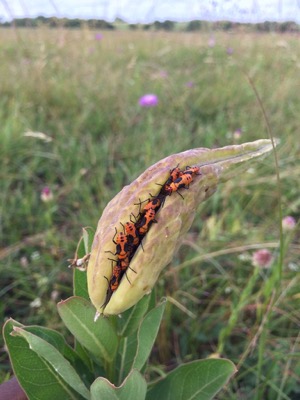 Referring to her endless outreach and numerous master-plan meetings –

“There I was, trying to educate people for the 500th time, on what a prairie should be and what it means to preserve one.”

Stay up to date on everything green in North Texas, including the latest news and events! Sign up for the weekly Green Source DFW