If you think GSDFW rabbit stories are multiplying, Amy did a story on a wild rabbit rescue group called Rabbit Rescue in April.  The following article is about the Bunny Burrow, a Fort Worth-based nonprofit that focuses on rescuing domestic pet rabbits in North Texas. Pictured: rescued bunny buddies Eden and Sawyer. Photos courtesy of the Bunny Burrow.

On this planet, the lines are clear: predator or prey. The pets we know and love – dogs and cats – are predators. They’re confident, move about easily and enjoy resting in places with a view.

Bunnies, on the other hand, are prey animals. Being visible is a huge risk. Being held is akin to being captured. Being up high means they can’t escape quickly. 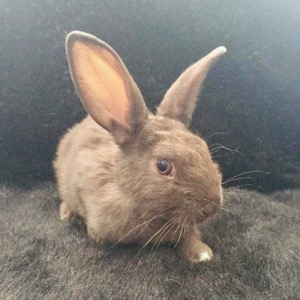 Bunny rescued by the Bunny Burrow.

“They are wonderful companions, but they are prey animals and don’t like to be off the ground. That’s our #1 misconception.”

Every Easter, tantalizing photos of sweet children holding bunnies come around. Probably a drugged bunny or in shock. Or worse, parents buy their progeny a pet rabbit to cuddle and play with at home.

“They’re adorable little animals, and people want to scoop them up,” said Gellar. 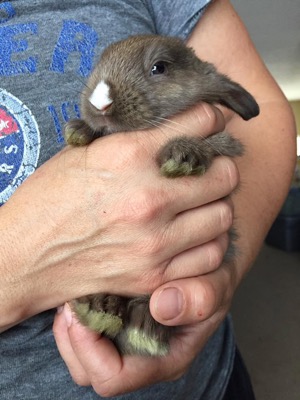 This baby girl has a distinctive white nose.

Unfortunately, even though domestic rabbits can be large, up to 15 pounds or more, their skeletons are fragile. Too affectionate of a squeeze can break bones. A dropped bunny can end up with a busted backbone. In other words, cuteness kills.

So Bunny Burrow comes in. Education is foremost, and in spring the need is nonstop.

“We’ve had several people call us, just in the last few weeks, having a birthday party for their very young children, like one-year-olds,” said Gellar. “And they want to know if they can rent some bunnies to play with and pet. We’re nice when they call, but we educate.”

Rabbits are the third most surrendered and adopted animal in shelters. Some owners dump pet bunnies in parklands. 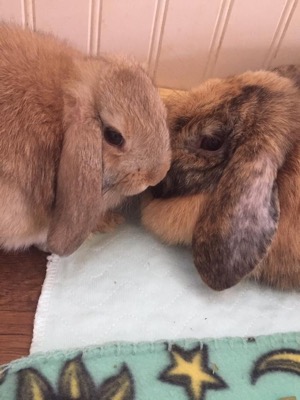 “There are so many abandoned bunnies that we can’t keep up with it,” said Gellar. “It has been so bad this past year, and 2017 is starting out worse.”

While pet bunnies in North Texas don’t carry diseases that need vaccinations, they do resemble dog and cat ownership in another way: Pet rabbits must be spayed or neutered.

“That’s the second biggest misconception we encounter,” said Gellar. “Owners don’t understand why this formerly sweet bunny is spraying and being aggressive, so they take it to a shelter, or they abandon it.”

Being bright colored, domesticated and lacking in survival skills, pet rabbits dumped in parks quickly perish if not saved by concerned citizens. It’s horribly frightening for a rabbit to be in an animal shelter, surrounded by so many predators and unable to hide. The lucky few that volunteers save from these situations are usually emaciated, badly battered and terrorized. 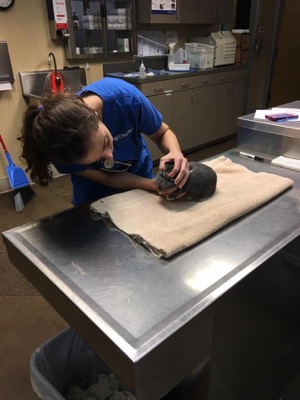 “We get so many bunnies whose spirits are very broken,” said Gellar. “We get neglected and tossed aside bunnies. We get sweet and social bunnies. They are all so different from the next, and all have different stories to share. But we are here for all of them.“

Domestic pet rabbits are related to the wild European rabbit, Oryctolagus cuniculus, and range from five to 15 pounds. Bunnies live 10 to 12 years. They have been bred over centuries to have an astounding array of looks, with 49 rabbit breeds in the U.S. alone.

Breeds include the wildly colorful, long-haired and floppy-eared American Fuzzy Lop; the flamboyantly furred Angora; the subtle, sleek and compact Dutch and Havana; and the velveteen Rex. Whatever color and personality you desire, there is the perfect rabbit for you. 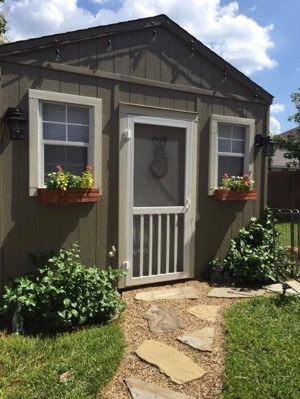 The Bunny Burrow relies on a North Texas network of caretakers who open their hearts and homes to domestic rabbits. Progress was made when group president Erin Ramsey received support for a “bunny house” holding up to a dozen at a time. Some fosters are long-termers, needing months or years of special attention for health or behavior issues.

The bunny house can hold up to dozen fosters at a time.

“Each bunny is given what a bunny should get in a forever home. They get toys, a bowl of fresh water, daily greens and veggies, and a good quality food pellet,” said Gellar. “They each get a litter box with fresh green hay.”

Most fosters allow free-range bunnies inside parts of the home, but all animals receive a large enclosure that serves as a den. Bunny Burrow does their best to house them in pairs because rabbits are social animals and happier that way. 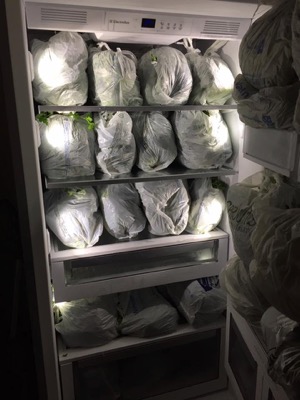 “The most rewarding thing is to get these bunnies that have been through so much, just tossed out, in horrible shape, broken bones and other injuries never tended to, ears full of mites,” said Gellar. “And nine times out of 10 those are the sweetest bunnies you will ever have.”

A fridge full of greens.

“We are always in need of people who are willing to open up their homes and hearts to helping save unwanted rabbits,” said Gellar. “Bunnies come in and they’re terrified, and they don’t know what’s going on. Then you see their true personality come out when they have just a little bit of stability. And once they’re in a permanent home, it’s only going to get better.”

Around 100 rabbits found new homes in 2016 through Bunny Burrow efforts.

“All day every day, it just never stops,” said Gellar laughing. “There are bunnies all over my home; we field phone calls and emails. It is definitely a full-time job.”

Now a resident of Fort Worth, Gellar had pet bunnies growing up while in 4-H, “back when we didn’t know not to keep them caged up.” Once on her own, she quickly volunteered for rabbit rescue.

‘’I wanted to help because I knew this was a growing problem,” said Gellar. 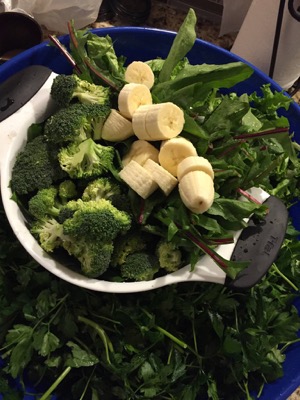 Beatrix Potter children’s literature about Peter Rabbit and his pals impacted Gellar. The charming, rabbit-eye-view of the world enchanted her, helping her meet bunnies on their level.

“If you want to have a bunny in your home, you have to change your thinking as to what’s best for the bunny and how the bunny actually lives,” said Gellar.

“People will say, ‘We want one that doesn’t chew.’ Well, it’s a bunny. Their natural behavior is chewing and digging, so you have to prepare your home for that.” 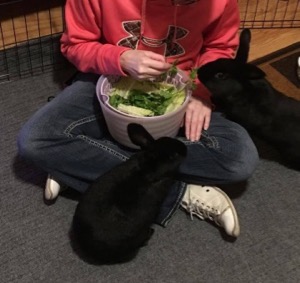 Rabbits have continuously growing teeth that must be worn down by vigorous chewing. So plenty of chew toys are required. Chewable temptations like drapes and other dangling textiles are to be avoided. Dangling wires and cords are endlessly fascinating. Bunnies need a cardboard box with shreds to dig in, or they’ll find a place in the carpet or baseboards.

Once accommodated, rabbits make great pets. As herbivores, they’re perfect for vegetarian and vegans. No shots are needed, and care is relatively low cost, though annual vet visits are best. Rabbits are quiet, noted Gellar.

“They may make a little noise playing with their toys, but they won’t be barking or anything like that. They’re litter trained, and they train themselves as long as they’re spayed and neutered. My bunnies at least put themselves up at night without prodding.”

Photos and personality descriptions of adoptable bunnies are at the Bunny Burrow website. 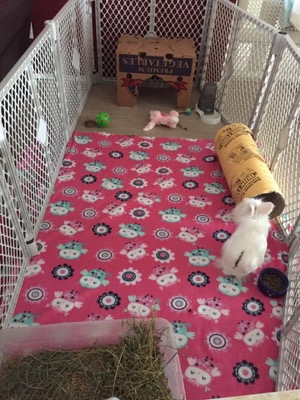 Once owners know how to “be the bunny,” they’re a lot of fun as pets. “Bunnies love toys,” “said Gellar. “They like to play with plastic slinkies and jungle balls. They like tunnels and cardboard boxes they can chew up and dig in and rearrange. You have to give them a lot of enrichment that works with their natural instincts.”

Bunnies need enrichment and room to hop around for happy home life. They can be trained to use a litter box. 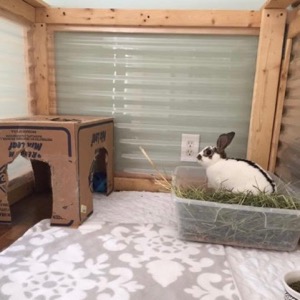 Entertaining bunnies can be an ongoing crafts project, one that cat owners know well. Cardboard boxes connected to create rabbit warrens of tunnels and dens. Food wrapped in crinkly paper. Tubes stuffed with hay. Bunny mazes. Do a YouTube search for “rabbit enrichment;” some of the videos are hilarious.

“They are very cat-like in that the attention is on their terms,” said Gellar. “They’re affectionate animals and social as well, but on their terms.”

“They’re very curious creatures when they feel safe,” said Gellar. “If you get down on the floor with a book, or if my daughter is playing with her Barbie dolls, they’re coming over to see what you’re doing. They will interact with you a lot if you get down there where they are.”

About: An all volunteer operated 501(c)3 non-profit organization in Fort Worth. 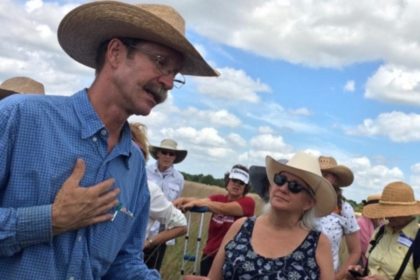