The NPR news quiz Wait, Wait…Don’t Tell Me! taped at the AT&T Performing Arts Center Thursday. Here’s what you should know before its broadcast on Saturday.

What do you call these people of Wait Wait…Don‘t Tell Me!, the popular Peabody Award-winning weekly news panel from National Public Radio? Host Peter Sagal is described as a playwright and actor. The show’s official judge and scorekeeper, Carl Kasell, is a longtime NPR newsreader. Panelist Tom Bodett is a humorist and Kyrie O’Connor is a journalist. Only Paula Poundstone is a stage comic.

Yet there they were on the stage of the Winspear Opera House at the AT&T Performing Arts Center on Thursday night, being professionally hilarious. A sold-out house of about 2,300 savored every word, wondering what bonbon would escape lips next. Does that make them wits? Perhaps quipsters? Or just funny?

The live taping began with essentially an extended stand-up routine from Sagal, warming up the crowd. He told of his father from Brooklyn moving to and graduating from Highland Park, a slight dark Jew among towering blond Aryans: “I say to you now, as he said then, ‘Please don’t beat me up again’.” He gushed over the Arts District’s beauty, but wondered where the folks were, finding only a bronze statue of people running: “We were afraid some weapon had gone off… You must be frustrated that with all this everyone goes to Dealey Plaza.” Pause for comic effect. “We did, too.”

As many comedians do, Sagal thanked Texas for its endless source of comic fodder, equating us with Florida for cultural insanity, but insisting that our chest-beating politics can not be topped.  Though most touring comedians poke Dallas for its tamped down nature, he declared attendees as being rowdier than the usual NPR crowd, wondering how that would fare since it was a far larger crowd than at their 600-seat Chicago home. Sagal introduced the panelists, extolling their Texas connections: Bodett, spokesman for Dallas-based Motel 6; O’Connor, of the Houston Chronicle, and Poundstone, who said of her Texas connections “I got nothing.” Sagal gave audience instructions for how the taping would go, the familiar theme music played, Kasell intoned, and off we went.

The joy of Wait Wait…Don‘t Tell Me! is the chance to get caught up on the news, without being depressed by it. Staying to the staple games—”Who’s Carl This Time?,” “Listener Limerick Challenge,” and “Bluff the Listener”—tied together with quiz bits of “This Week’s News,” the panel plowed through Richard III history jokes about Tudors and Plantagenets, a theme park being planned in Bin Laden’s last home of Abbottabad, Paris women in pants,  and even managed to extract humor from drone strikes. There were long stretches of gab of Sagal and panel trying to top each other, with Poundstone’s left-field observations often serving as the cap.

“Not My Job” with Dallasite Erykah Badu was a little flat. Perhaps it was her demure outfit and hair. The biggest reaction occurred when Sagal mentioned “every liberal in the city of Dallas” was present for her. In discussions of Badu’s music video “Window Seat,” which featured her striding through downtown until she was stripped bare, Sagal’s creepy salaciousness was weirdly contrast to Badu’s intellectual discussion of groupthink that inspired the video. She did have a great line about making the video: “We walked until I was nude and then we ran,” a little further than she wanted to since getaway van parked in wrong spot. But she aced the quiz on specialized dating.

Sagal basically defines snark. His vocal tone hints that there’s much he’s thinking, but too kind to say aloud. It sometimes overshadows his incredible memory and voluminous knowledge of news. His awareness of specific details of even small topical stories at one point left the panel slack jawed. According to Poundstone, Sagal is tied to the news feed on his smart phone 24/7. Yet most astounding is his skill at integrating his tightly honed script into improv banter with panel and callers. Like watching Fred Astaire, but with words. No wonder many, like me, swoon for Sagal, sapiosexual-style. Witty, intelligent, shortish balding men make my heart race; heck, I married one.

The concluding quiz, “Lightning Fill-In-The-Blank,” determined the Wait Wait…Don‘t Tell Me! winner, such as it is. Poundstone staged her usual come-from-behind campaign, but suffice it to say that Texas will be made proud when the show airs to 3.5 million radio listeners on Saturday, Feb. 9 at 11 a.m. on KERA/90.1 FM. (It repeats at 1 p.m. Sunday; and you can listen to it after the first airing online at www.npr.org/programs/wait-wait-dont-tell-me)

For a process freak like me, it will be so interesting to hear what of the 1 hour, 40 minute-taping makes it into the 55-minute show that airs. The cast of five was outnumbered by the seven-member tech and production team who stayed busy throughout, communicating to Sagal through his iPad. Producers noted as the show went along what needed to be re-taped, mostly due to Sagal speaking too fast. A surreal six minutes of watching Sagal having conversations with himself concluded the taping, done briskly, Sagal advised, because “The quicker we do this, quicker we get to the bar.” 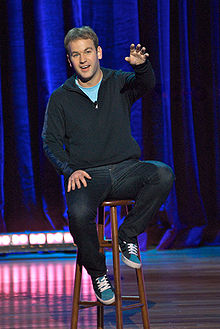