A project of Dallas County Open Space in conjunction with the adjacent DISD Environmental Learning Center.

Hiking crew: Lisa Blackford, Valerie Grimes, Martha Heimberg, Kristi Kerr Leonard, Amy Martin, John Spaulding, Ann Willis-Brown, and two people whose names were given to me and then I lost them. Tim Cloward and Lisa Huffacker joined us for the first section.

It was an overcast January day with a slight chill breeze. Our hiking gang gathered at the preserve parking lot, which is now in front of the preserve (don’t believe the website), and set off into the woods. We took the right fork, a wide asphalt trail that leads to a small lake through a Post Oak Savannah.

Well, a Post Oak Savannah for a while, far too choked by invasive woody plants. Savannah is a transitional zone between prairie and forest — medium-height grasslands spotted by trees. In the case of Post Oak Savannah it’s modestly high, stiff and starkly shaped blackjack oaks and post oaks with thick leathery, deeply lobed leaves.

A savannah needs management like a prairie. Without wildfire and herds of large ungulates like buffalo, the law of succession sets in and a forest eventually results. Which is why very little open Post Oak Savannah remains, reducing diversity of habitats. Post Oak Preserve contains one of the larger remaining examples.

Savannahs in northeast Texas get invaded by juniper and eastern red cedar, privet and other invasive landscape shrubs, and opportunistic hardwoods like hackberry. Same happens with native grasses such as little bluestem and Indiangrass being replaced by pasture grasses like Bermuda or invasive KR Bluestem. Post Oak Preserve is resisting the grass onslaught better than the woody, but we did see some KR Bluestem on the lakeshore.

We ambled down the asphalt trail. The dominant tree was post oaks whose stiff leaves thickly coated the ground. A few live oak, black hickory, and blackjack oak were mixed in. We found an occasional Hercules club/hop ash and osage orange/bois d’arc, and maybe a couple of bumelia.

For the understory, there was a fair amount of inland sea oats, occasional coralberry and invasive vining honeysuckle, significant patches of roughleaf dogwood, and greenbriar, lots of greenbriar.

After passing a small picnic area, we made it to the shallow lake, which was rather bare, but we did see fresh deer prints (among others). We traced the sandy shore and around the intake tip, then walked along the base of a tall lake levee. Our goal was the larger savannah area to the east/northeast. 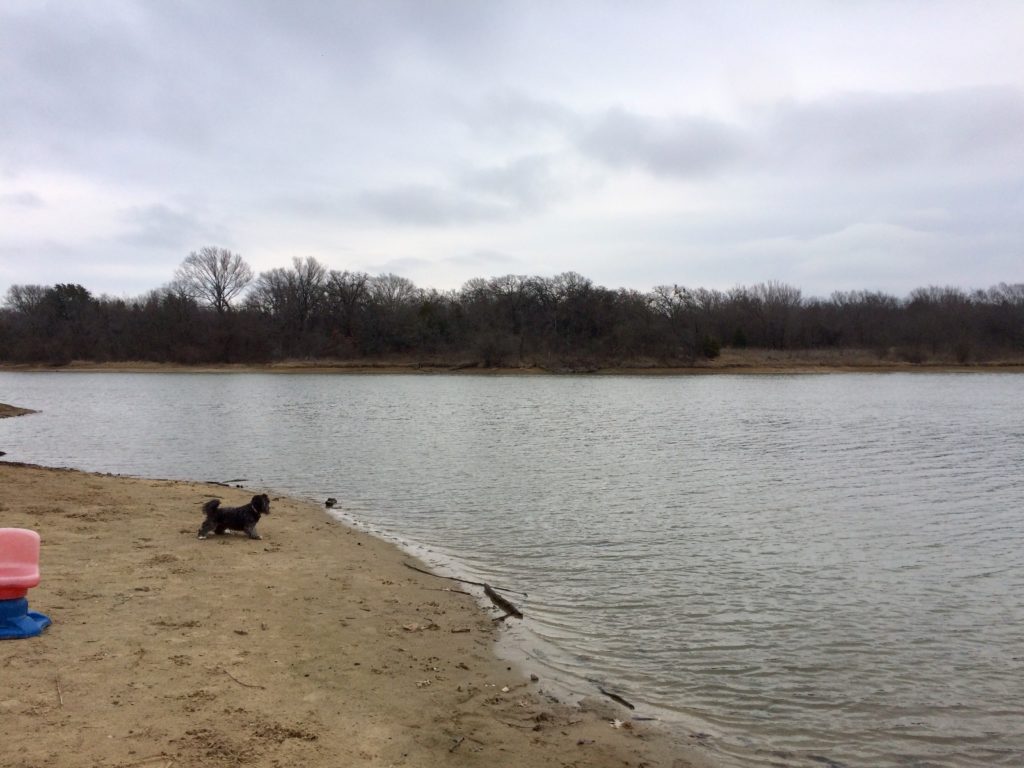 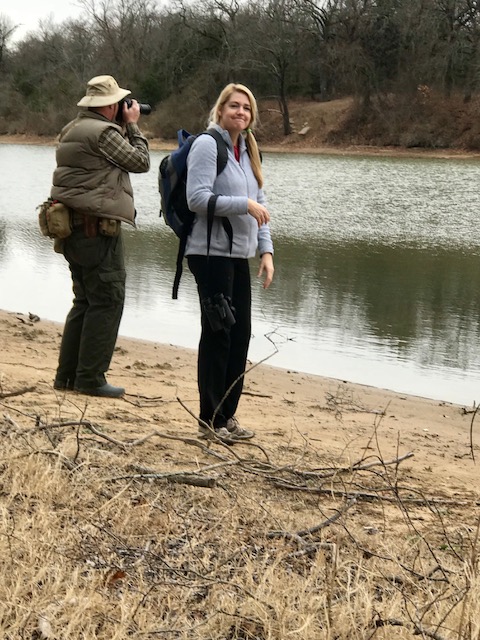 The whole lake area was riddled with trash stashed in the grass. The east side was especially bad. Presumably left behind by fishermen, but some of it seemed like it was from homeless residents. Beer cans and water bottles made much of it, plus snack bags and food debris, and odd stuff like garbage bags, Styrofoam, and ropes.

We filled large trashbags worth and barely dented it. Many items were just too big. The lake had a crashed rowboat in it. On the shore was the spiraling metal-cord remains from a burned-up tire and some mangled camp chairs. 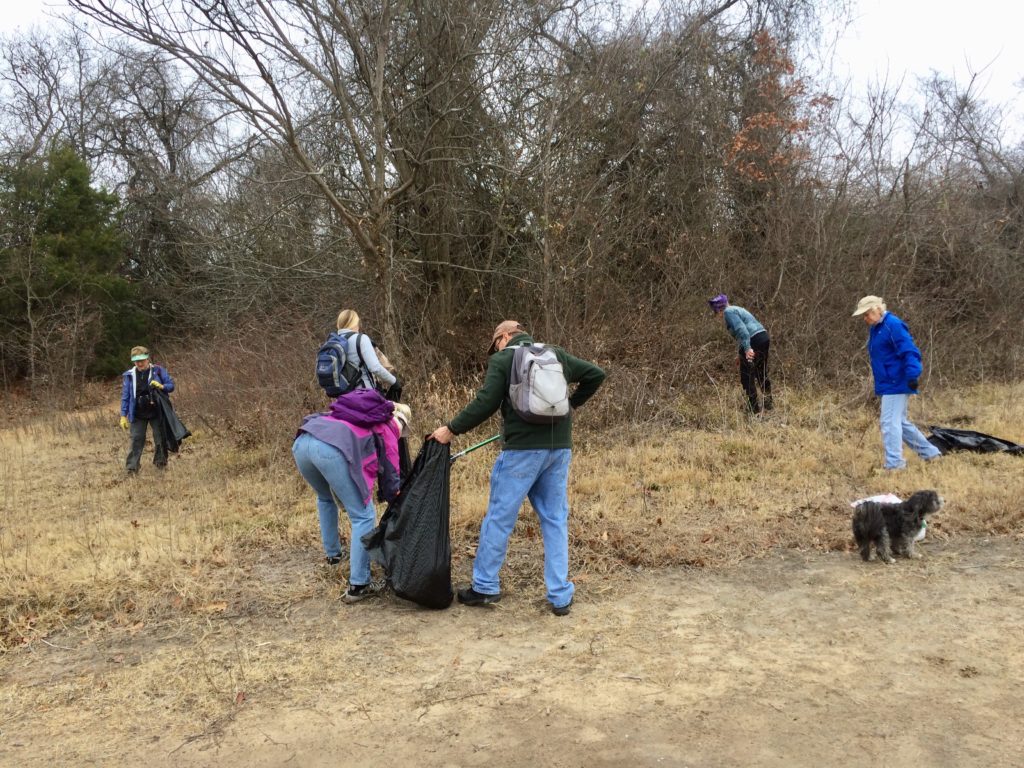 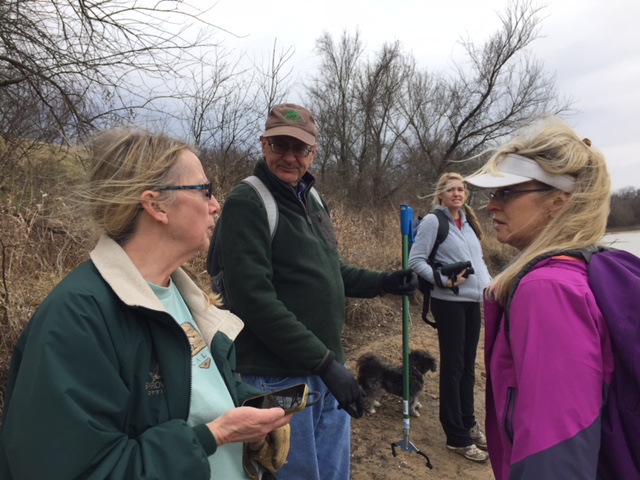 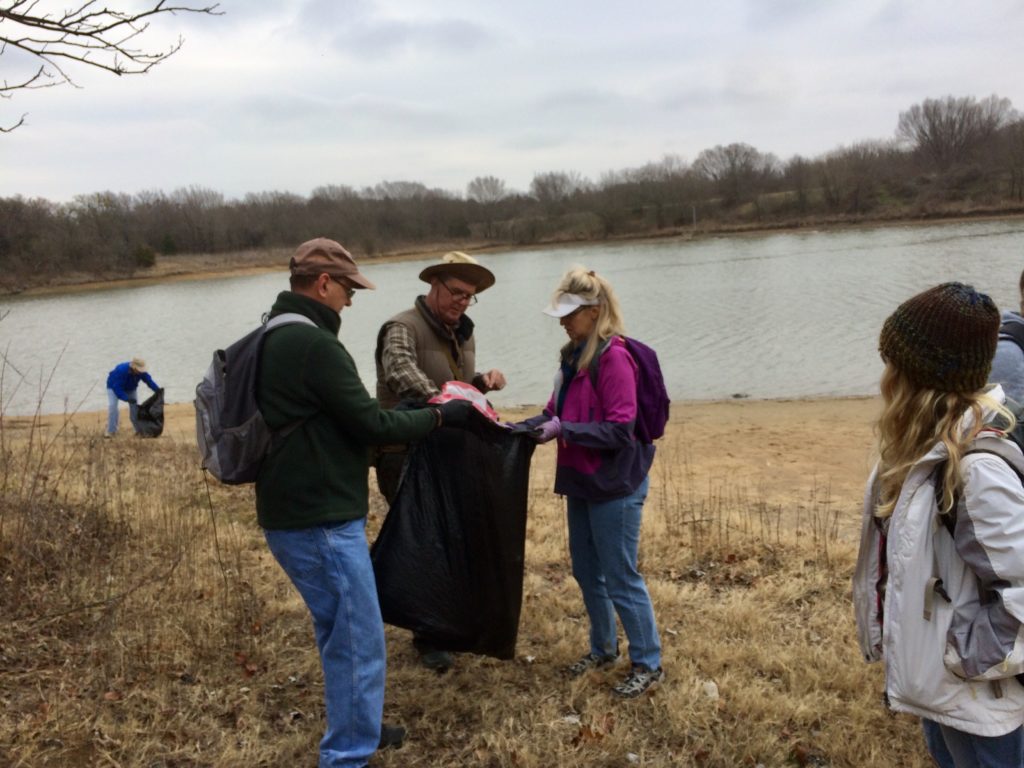 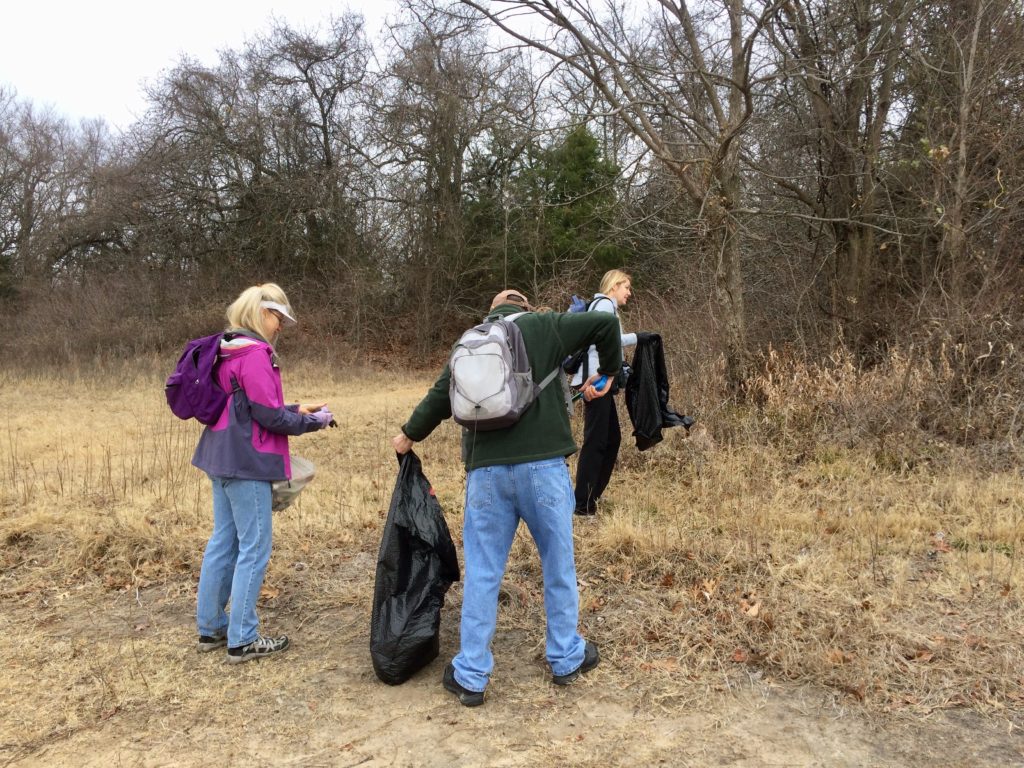 Off-Trail Through the Savannah

Working only from a Google map satellite view, we searched for savannah patches indicated on it, seeking patches of sunlight between wooded clumps. We were rewarded with many beautiful and weird things. Weird #1 was a large black hose leading out of the lake into the savannah brush.

The sunny savannah prairie patches delighted us. We hopped from one to another, going east/northeast until we ran out of time, and then headed back northwest toward the entrance. Robust meadows sheltered little bluestem and something that looked like little bluestem, but taller and with curved seed stems. Good showings of switchgrass and Indian grass. A few forb flower heads that were too degraded to recognize. The edges boasted occasional possumhaw and coralberry shrubs with bright red and magenta berries. 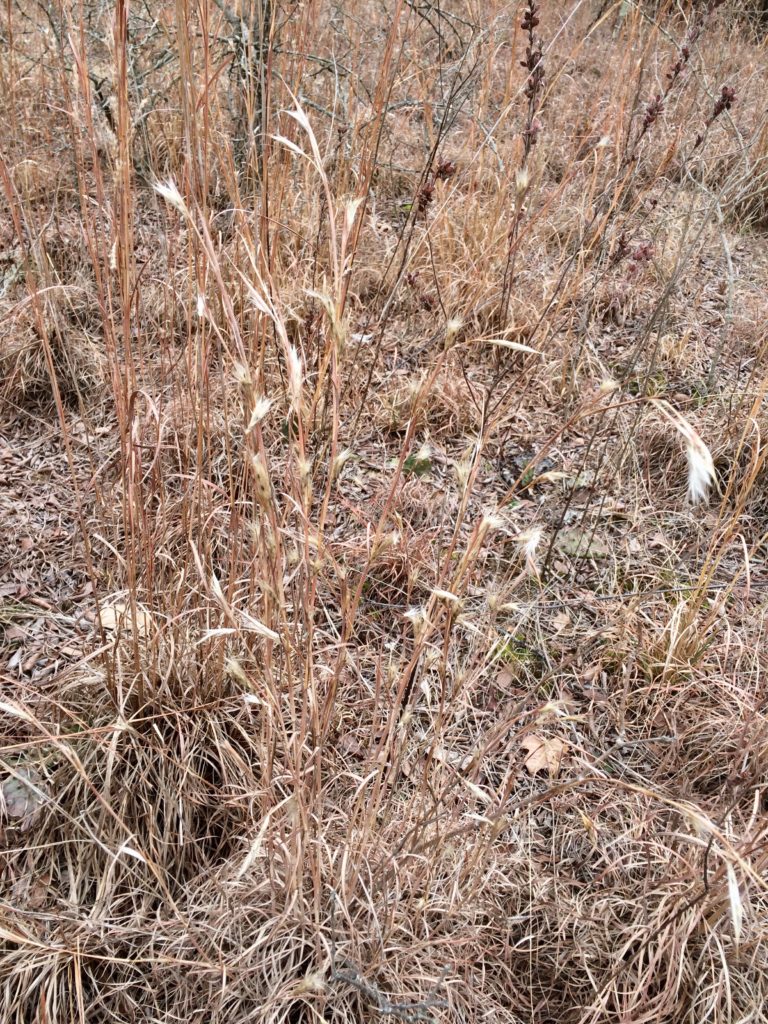 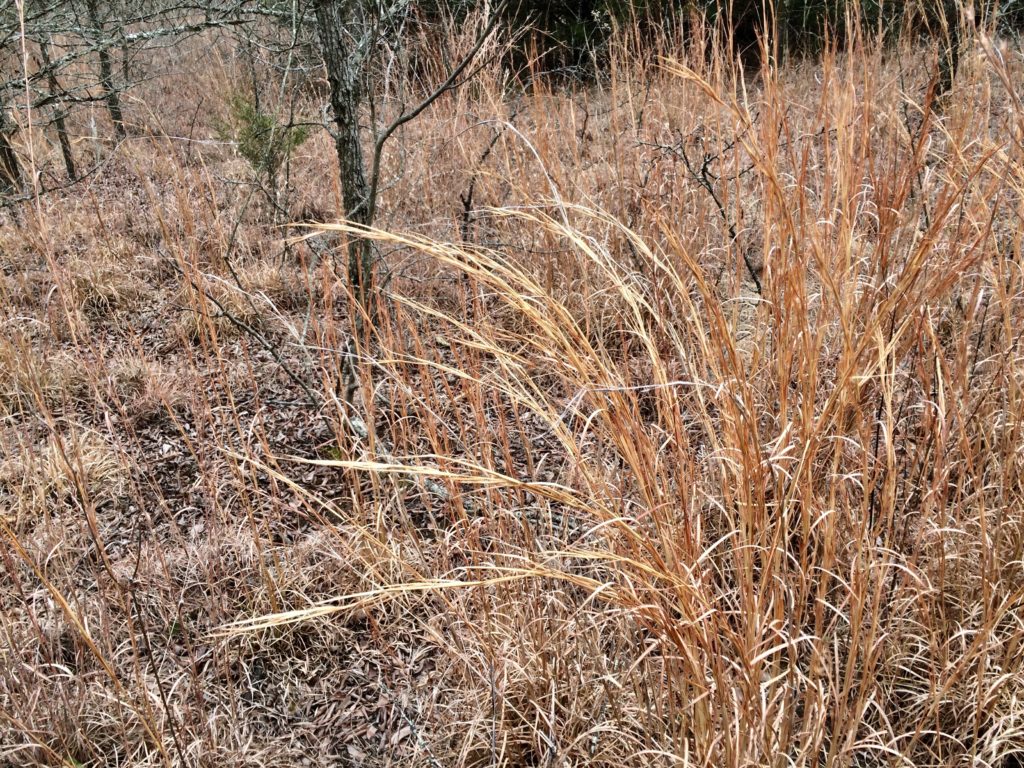 Weird #2 was a homeless encampment, which may have been a day camp area for fishermen. Lots of trash, of course, but also tarps filled with hay that seemed to be beds. Very itchy beds, one assumes. A horrible mess rapidly spreading and tumbling toward the lake.

It’s such a remote area, far from transit lines, we found the homeless presence puzzling. But we never encountered any humans, just their messy residue. Wintery months (Nov. to March) must be the off-season for homeless and fishermen, making it the best time for hikers to visit. 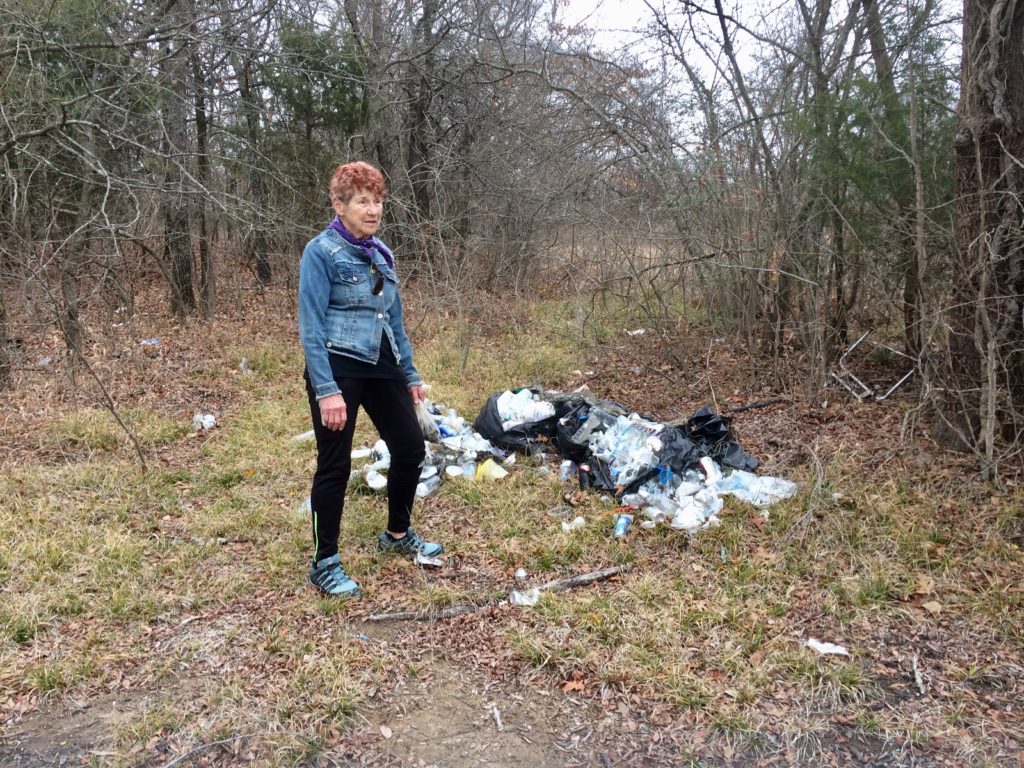 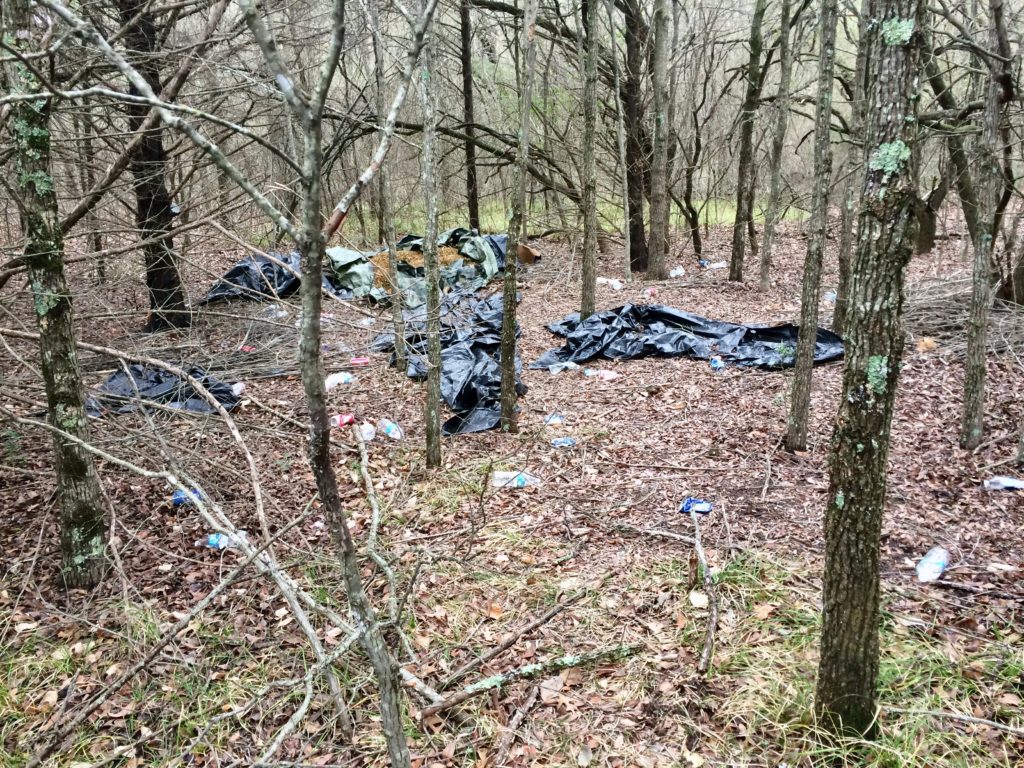 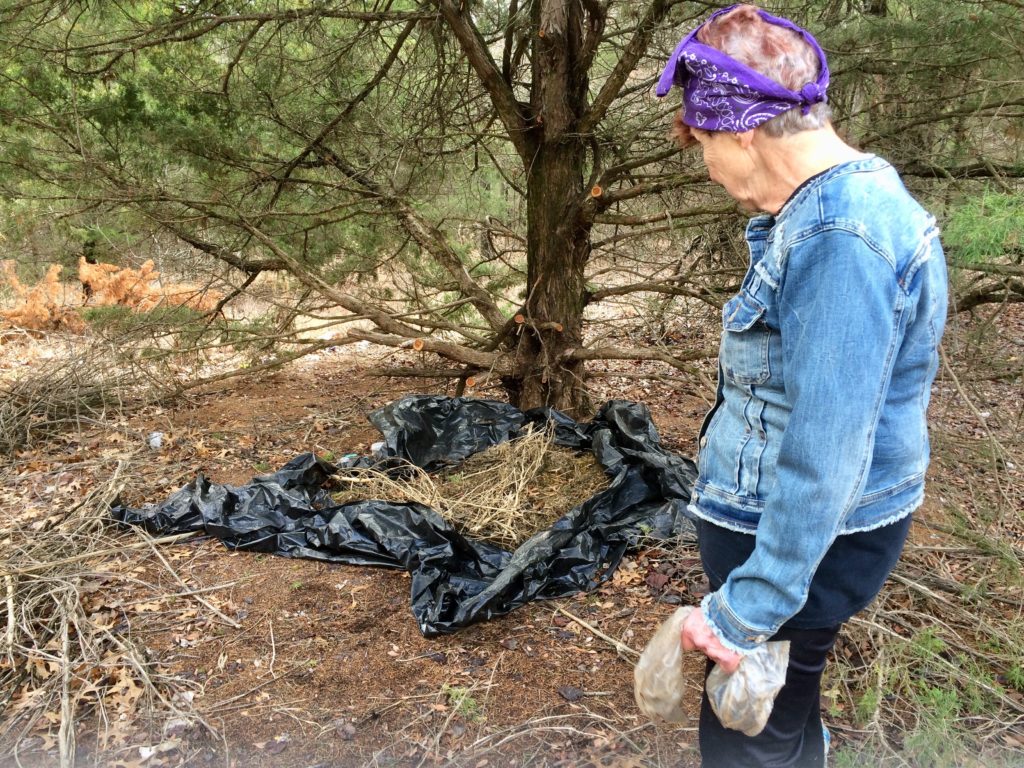 Weird #3 was a clearing where we found the end of the black hose! Plus a herbicide backpack. The clearing stuck out because some hardwood trees were purposefully cut. John noticed that the there were many intentional plantings of a small woody plant we could not identify. Seemed to be a wildlife habitat study area for the DISD Environmental Learning Center across the street.

We turned northwest, bringing us back to the lake’s inlet end. That proved challenging to cross. Many muddy boots ensued. Everyone found their own way, with some of us forming a bridge of downed timber. Ah, bushwhacking. We stopped to admire a killdeer couple in noisy flight, with young or at least smaller birds in tow. I could have identified them, but that would have required remembering the binoculars in my hiking belt. 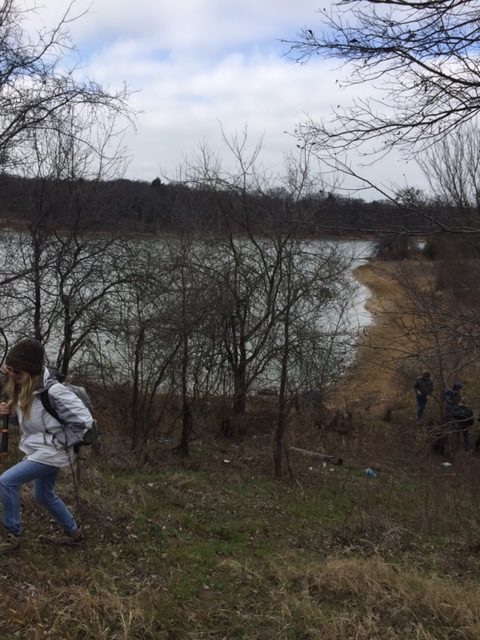 Back on the original side of the lake, we rejoined the loop trail, stopping first at a cedar elm with a marvelous, moss-covered low horizontal limb for photos. 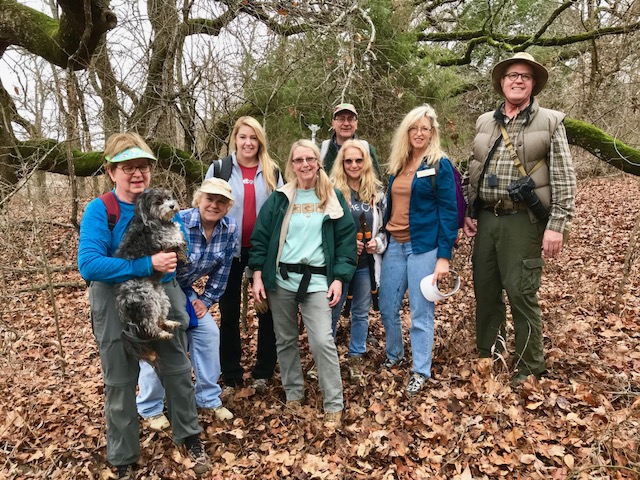 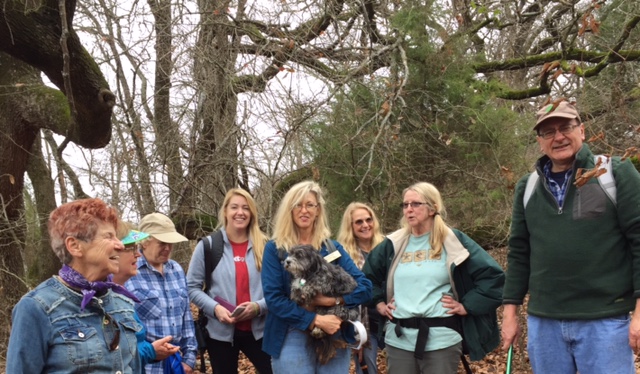 The wide dirt path was called Lakeshore Trail until it met the Wee Folks Trail. I think. It was hard to tell; signage was spotty. But it was very cool to think of schoolchildren using this trail as one of their first in-depth explorations of wild nature.

We made quick distance through a classic woodland forest of white and/or red oaks, green ash, even a little black hickory and osage orange. Big score was seeing a water oak! The area was graceful and open with a tall canopy and light understory. We pondered an area across a small wet-weather creek where trout lilies were said to grow. It brought happiness to think of that fussy, delicate plant thriving there.

After all the bushwhacking, it was nice to saunter an easy trail and converse with folks. 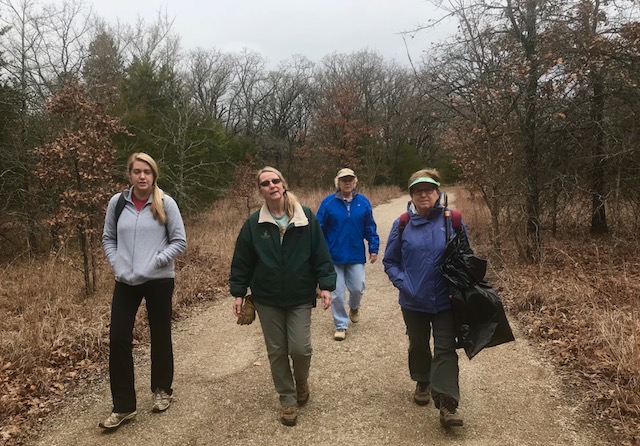 Soon the parking lot greeted us. We dived into cars and shared snacks and water and thoughts about the hike. I was honored that group of hearty folks took off into the urban wilderness with me, without a concrete goal or assigned path, just a desire for adventure and to experience areas few other people see.

We hiked for 3 hours. Give this place 5 hours for a full exploration with rests. Had we pressed further east/northeast, we would have reached a larger, less invaded savannah area, if the overhead Google view (date unknown) is to be believed. 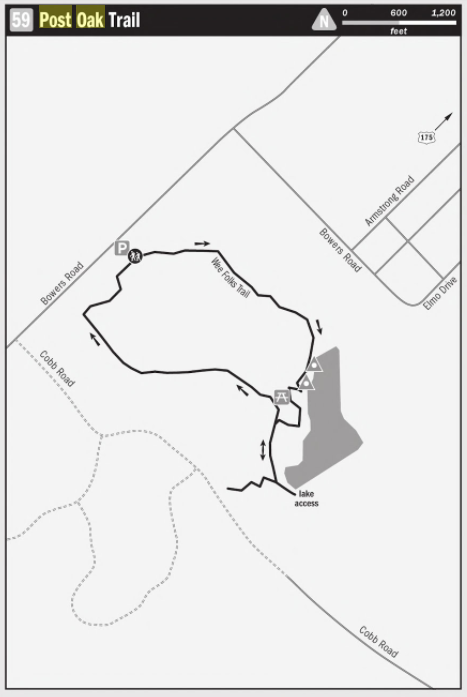 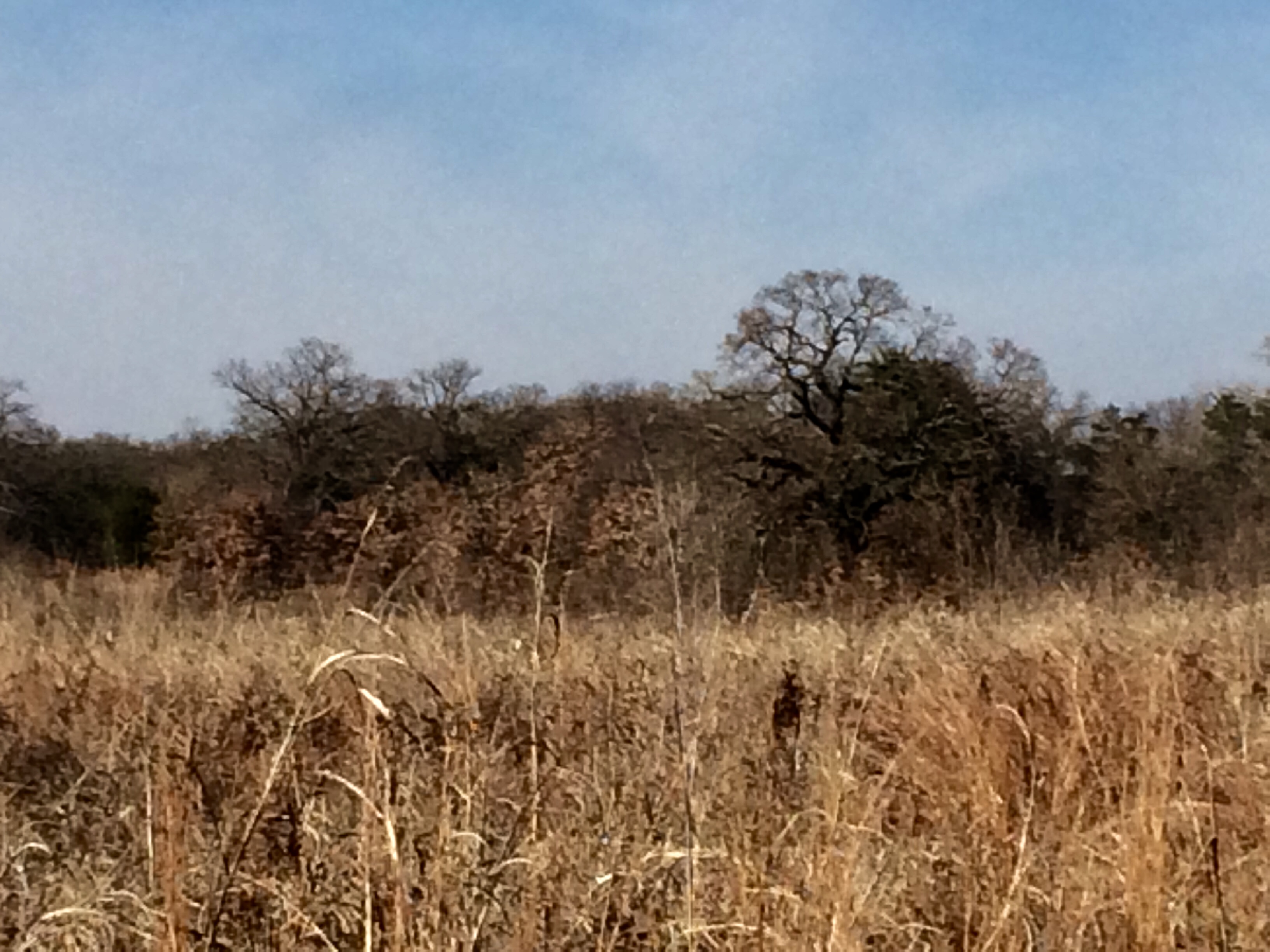 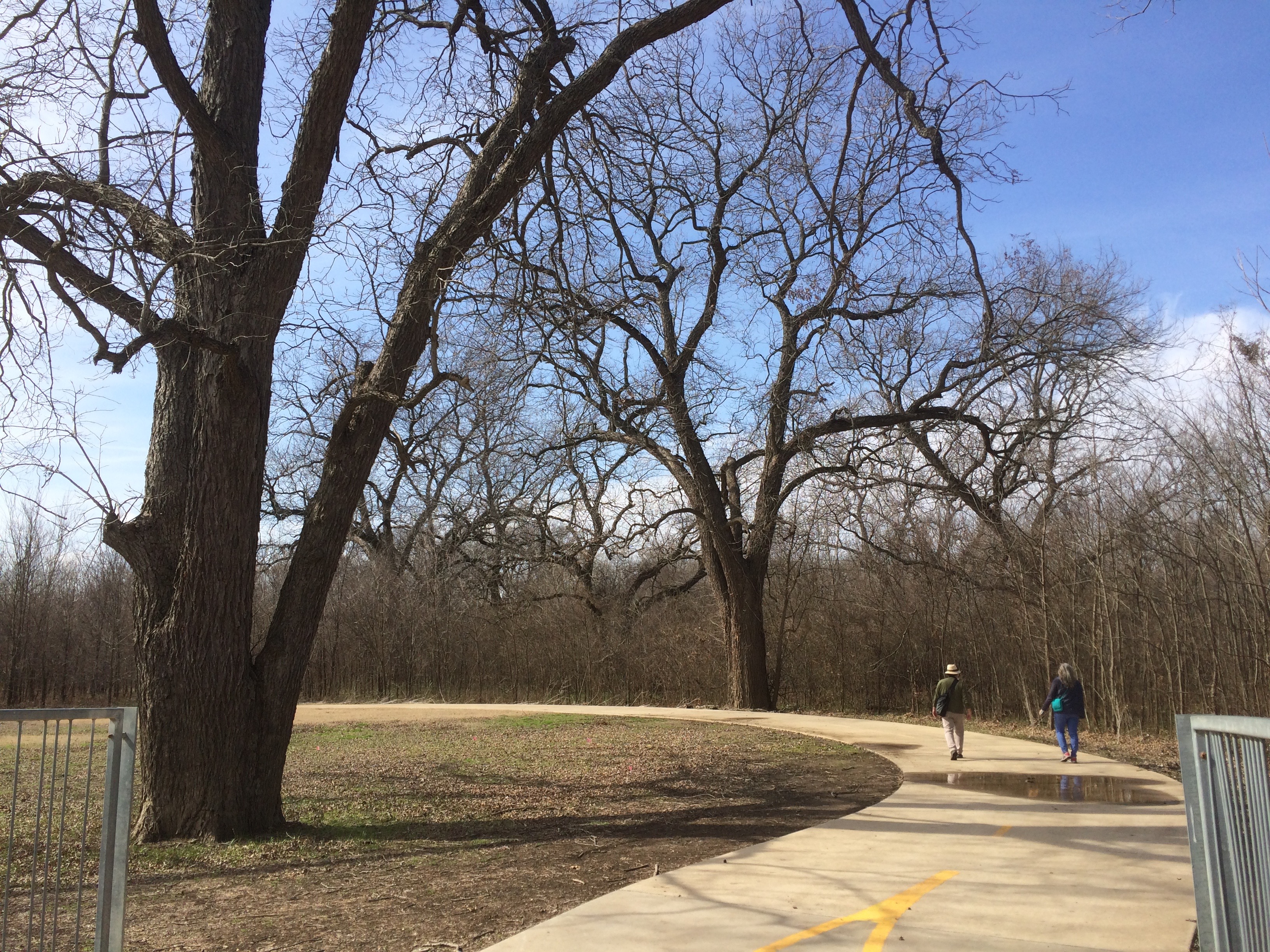