Life is better when you laugh. Here’s a quick scan of the latest in North Texas comedy.

The Dallas Comedy Festival kicks off March 26 to 30 and the line up looks stupendous. Weekend headliners are very hip: Keegan-Michael Key of Key & Peele and Maribeth Monroe of Workaholics. They are part of The 313 show of long-form improv that caps Friday night. Saturday night culminates with Monroe’s solo show Horrible Women, plus a set with Monroe and David Razowsky, a legendary theater improvisation teacher who takes being in the moment and connecting with the flow to Zen master levels. Actors should be flocking to his workshops.

The two stand-up nights are capped by very imaginative presentation caps. People and comics share tales of inebriation in the Chicago sensation Blackout Diaries: A Comedy Show Where There Are No Stupid Questions. Master comedy teacher Dean Lewis gets together some of the area’s best comedians and gives each 15 seconds to look at a list of topics and create an instant coherent set—sort of like Chopped of comedy. The core of the festival is comedic improv. Two hot improv acts to watch for include TwinProv out of Oklahoma City and Shock T’s musical comedy trio from Chicago. Also from Chicago is Jane Austen, improvised Jane Austen that should be solidly camp.

If you’re a fan of stand up, Moontower Comedy & Oddity Festival is for you. It exploded out of Austin’s Paramount Theater in 2012, attracting multiple national stand-up talents, selling out many shows even in the first year. Of course, Austin IS a phenomenal comedy market. This year’s fest, April 24 to 27, has pulled in film stars such as Dana Carvey and seemingly every top-league stand up in the business.

With the closing of the Dyer Street Bar, the Alternative Comedy Theater is seeking new home. They’ve launched an IndeGoGo campaign to raise $10,000. No doubt some righteous improv benefits are in the works. Another improv club is definitely needed, something to branch Locked OUT Comedy in Plano/Frisco, and Dallas Comedy House and Ad-Libs in Deep Ellum. ACT acts need another time slot than the too-late-for-old-folks 11:15 slot at  Pocket Sandwich Theater, and independent improv groups would benefit greatly from more stage time. ACT has got move fast. Big Sexy Weekend of Improv is usually scheduled for June.

Happy 16th birthday to Four Day Weekend improv nightclub and group in Fort Worth. They site as their achievements “performing for the president, receiving the Key to the City, winning the Texas Star Award for ‘Best Entertainment’ from the International Special Events Society, and publishing our first book, The Art of ImproviZEN.”

The line-up at The Improv can get so predictable, and then something like this comes along: “Snake Encounters” with Daryl Sprout, a snake-handling comic magician, on Sunday March 10 in Dallas. Some of the over dozen reptiles per show are HUGE.

Looking at the deep, wide and weirdly creative improv scene in Austin, it’s clear that University of Texas students feed it. So you’d think that with a half-dozen full universities and a host of colleges in North Texas that there’d be a college improv scene. But it seems invisible.

Shut Up and Prance sketch comedy troupe and filmmaking collective founded by Naaman Rodges and Riley Morris in Fort Worth is picking up steam. Here’s some of their latest: The Tough Smart Intermediary. . . FTP Comedy presents The Quasi-Annual FTP Awards as part of the Out of the Loop Fringe Festival. . . Fourth Wall Comedy took home the best group prize at the Frisco Comedy Festival.

Jokers Wild Comedy Show hosted by Chris Kazmarski continues to pull in crowds at House of Blues Dallas. . . Backdoor Comedy Club has been selling out both shows every Saturday night. . . Been seeing more local stand-up talent at the Hyena’s Dallas, including a collection of Latino comics wrangled by Nick Guerra. 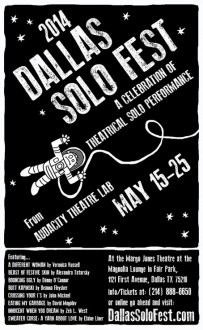