The youth long-form improv troupe Unicorn Clearance, a brainchild of Fun House Theatre and Film, will be a highlight of the Big Sexy Weekend of Improv at the Margo Jones Theatre.

Dallas — Improv for children, piece of cake, right? Children are so good at make-believe. That might be true with short-form improv, the games-based style seen on Whose Line Is It Anyway? where the emphasis is on silly and it’s all about the joke.

But long-form improv? That’s serious business. Performers must take a suggestion from the audience and construct on the spot a theatrical narrative 15 minutes to a half-hour long or more. That requires the kind of focus, attention and memory that even improv-trained adults find challenging.

With ages ranging from 10 to 16, Unicorn Clearance seems to be the only full-time, long-form, children’s improv troupe in the country. It makes sense that the troupe is part of Fun House Theatre. The Plano-based enterprise is renowned for staging warped versions of adult plays with child actors, most recently Game of Thrones, Jr. Another wasDaffodil Girls, inspired by David Mamet’s Glengarry Glen Ross featuring cutthroat Girl Scout-like cookie salesgirls. The play helped launch the comedy and music powerhouse Lizzy Greene, age 10, into the starring role on the upcoming Nickelodeon sitcom Nicky, Ricky, Dicky & Dawn.

Rather than being limited to portraying children like themselves in their natural milieu of school, play and summer vacations, Unicorn Clearance members are free to enact business types, workers, scientists, athletes, parents and more, even couples in marriage counseling. And occasionally they get to portray kids. Best of both worlds.

Unicorn Clearance, along with Not Born Yesterday, kick off the final night of the Alternative Comedy Theater’s Big Sexy Weekend of Comedy. The all-ages show happens at 5:30 pm Saturday at the Margo Jones Theatre, 1121 First Ave., located in the Magnolia Lounge in Fair Park across from the Old Mill Inn. There are other groups at Big Sexy, with performances at 7 and 8:30 p.m. July 10; 7 and 9 p.m. July 11; and 5, 7 and 9 p.m. July 12.

On a recent Thursday night, Fun House’s resident acting teachers Jeff Swearingen and James Chandler have assembled Unicorn Clearance in the Plano Children Theater’s black box theater. An improvisation jam session was underway to tune up for their Big Sexy gig. Jam sessions are to improv what a rehearsal is to a play.

In the center of the stage, Lizzy Greene, 10, and Doak Rapp, 15, engaged in an intense conversation. Greene bristled with intensity; Rapp acted befuddled as the business partner. The dialogue was complex with lots of personal-history backstories. Troupe members flanked them in two lines on the stage, poised for the opportunity to tag in and inject a new character into the scene. And they wait.

With a T hand motion, Swearingen brought it to a halt: “The dialogue is great and all that, but you’re locked in. There’s no way for others to get in. It’s too much about you two. You see what I mean?” The kids nodded and took their seats on the front seat of the theater. Not talking, not fiddling with phones, not slumping, but alert and waiting. Like professional actors would.

The next improv exercise involved space work, where Chandler excels. The aim was to learn how to perform gestures and actions that illustrate where the characters are located and what they’re doing, all while establishing who they are through dialogue. Consciously doing all three at once in front of an audience is like juggling reality while dancing on a high wire.

“If there is a specific theme to these games tonight,” said Swearingen later, “is that the physical world is lacking. If I let them sit there and talk, they’ll come up with witty things, their relationships will be sound for the most part. But they’re kids and I don’t want to limit them early. They have to learn to make the world.”

Seeing kids improvising adult roles “is difficult sometimes because it’s such an anomaly,” said Chandler. But such is the Fun House way, a theatrical enterprise that revolves around Swearingen and producing partner Bren Rapp. Swearingen is best known as the director who pens many of the crazy Fun House plays. But he only writes them because he lacks funds to buy rights to existing works.

At heart, Swearingen is a teacher, a co-conspirator, a childlike provocateur who lives to help everyone bring the best of their selves out to play. A top area improviser and kinetically funny guy, he performs in The Victims, the long-running Alternative Comedy Theater ensemble where he excels in bringing maniacal characters and fantastical creatures to life. (His giant Sméagolish lizard from 2012’s Big Sexy haunts my dreams.) In the Fun Grip duo with Brad McEntire, Swearingen becomes a seamless complement, seeing plotlines unfurl from a mere twitch of McEntire’s eyebrow.

The Fun House juggernaut sometimes takes attention away from the core identity of Swearingen: being an actor. He wowed in his near-wordless role as The Boxer in the play of the same name and most recently delighted as a yuppie in Barbeque Apocalypse at Kitchen Dog Theater (both plays were by Matt Lyle). When it comes to acting, says Swearingen, improvising can be crucial, even beyond the way it enables actors to gracefully navigate the accidents, line flubs, and surprises that happen in theater.

“Improv is very good training to be an actor because of the listening factor,” said Swearingen. “You get sharp at paying attention to details, what a character’s mannerisms are, how they use their hands, how they hold their body. Some of the greatest actors aren’t very good improvisers, and some great improvisers aren’t very good at acting. But those who really get into improvising are a different breed of person.”

FUN IN THE HOUSE

Unicorn Clearance was born of necessity. “We had kids who’d been through beginner, intermediate and advanced improv classes, but we had no place to send them,” said Bren Rapp. “The kids needed a chance to develop further. Only performing will do that, so about two years ago we created the troupe.” The brave, the hearty, the “gluttons for punishment,” stepped forward, said Rapp. They’ve since performed at City Arts Festival and Café Bohemia, and opened for The Victims monthly shows at the Pocket Sandwich Theatre.

Coming from Fun House acting roster are Jaxon Beeson, 13; Taylor Donnelson, 16; Doak Rapp and Kennedy Waterman, 13. Waterman won a DFW Critics Forum Award, the first underage actor ever to do so, for her role as Shelly in Daffodil Girls. Jake Allen, 14, a naturally witty and comically neurotic fellow, is a complement to the animated Marisa Mendoza, 14, who thrives in the improv environment. Coming in from the comedy angle is Christos Kaiafas, 10, who may well become the next John Belushi. Greene’s participation in the troupe is limited due to being in California for her Nickelodeon gig.

After the jam session, the Unicorn Clearance kids sat on the stage edge to express their thoughts and experiences in improv. Donnelson shared that “improvising helps you with a lot of things you run into being a stage actor, but it’s also really fun. It helps you get out of your shell and put something of you in everything you do.”

Mendoza added “I’d like to think I was an improviser before I was an actor because I felt more confident improvising than acting.” Watching her think on her feet forming relationships and characters on stage, and her willingness to take creative leaps, brings to mind Kate McKinnon of Saturday Night Live.

Doak Rapp, son of Bren, loves the risk: “Improv has helped me become fearless in my performance style, whether it’s scripted or unscripted. Since Jeff teaches long form, improv has helped me understand story structure, and that helps me in theatre and also school. I think my love of acting and desire to become an actor sprung from the rush I got doing my first improv show. I am kind of an adrenaline junkie and improv is a huge thrill like nothing else.”

Jake Allen, a curly-haired milder Gene Wilder, seeks the funny: “I like the challenge. It really pays off when you’re in front of an audience and hear them laugh at the jokes you are making.” Same with the talkative Christos, who enjoys the fast pace of improv and comes alive for the laughs.

All of them echoed in one way or another Greene’s sentiment: “When you do improv, you learn more on stage and off you’re better off socially. When you have so many conversations with so many types of people in improv, it’s easier to do that in real life.”

The Comedy Cabinet: 2016 in Review 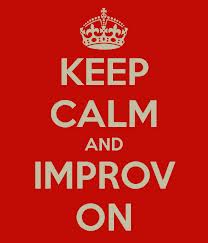