Dallas — Who knew a commedia dell’arte juggler could steal the spotlight at a symphony concert? The Dallas Symphony Orchestra presented Cirque de la Symphonie on Jan. 3 and 4, with musicians sharing the stage with acrobatic entertainers who strove to excel in a space far smaller than cirque performers usually perform.

Guest conductor Andres Franco of Tulsa’s Signature Symphony selected a spirited array of classics with a Latin flair reflecting his Colombian heritage. The up-tempo numbers kept the energy up during some of the less engaging cirque acts.

Juggling brings to mind balls tossed high in the air. Vladamir Tsarkov, Jr. specialized in bounce juggling, catching balls off the floor. His technique was smooth and creative, with cascades and reverse cascades that were grace itself as he upped the antes from two, four, six and ultimately a dizzying eight balls. His timing on Dance Boheme by Georges Bizet was impeccable.

Tsarkov’s second presentation, done to the familiar “Les Toréadors” from Bizet’s Carmen, featured the diablo, an hourglass-shaped object manipulated on a cord between two sticks. Once again, Tsarkov’s timing to the music was flawless and his attire, this time a red harlequin costume, was charming. The audience adored him.

Other standouts were aerialists Leysan Gayazova and Benjamin Lerman, who created superb imagery with Gayazova climbing up and spinning down the corde lisse as Lerman expertly spun the rope in an elegant arc (difficult!) with Gayazova suspended inside. Both moved perfectly in sync to Piazzolla’s Libertango.

Returning to aerial, Gayazova and Lerman excelled in a medley of two Rimsky-Korsakov selections from Capricco Espangol. Lerman flew gracefully and perfectly postured through the air shirtless as the aerial silks formed a long fluid cape. He had the audience swooning with Superman fantasies.

Aleksandr Deev, sporting a delightfully saucy steampunk outfit, managed to pull off some cyr wheel work that was impressive for being in such small confines, He spun tight circles with himself suspended inside the giant hoop, from vertical to skimming the stage floor. Deev served as a delightful clown character in some other acts. 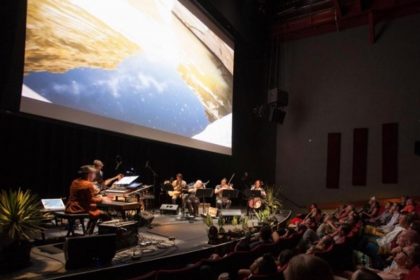