D ixon Branch Greenbelt is a stretch of park land along C reekmere between Peavy and Easton. For around two decades, the E astwood Riparian committee of E astwood Neighborhood Association has shepherded this slice.

Under its care, the meadow grass has been allowed to grow and native grasses introduced. Slowly, invasives like privet are being removed from the creekside woods. A pollinator garden was installed.

Now that I and a few other area residents need volunteer hours to satisfy North Texas M aster N aturalist requirements, there’s been a new upsurge in energy.

V inemont Woods is a section of trees that fronts C reekmere, separated from the riparian woods by a small open space called Hidden Meadow. The northern triangular tip was cleared of privet in an effort to maintain the health of a 100+ year old pecan. In the process, a small clump of roughleaf dogwood was revealed.

Volunteers returned to the V inemont Woods triangle to continue pushing back the privet, as well as bush honeysuckle. The project goal is to finish liberating the pecan tree, as well as two 75+ year old eastern red cedars.

First off was to remove a huge privet that prevented access to this section. Heavy-duty chainsawing ensued.

Revealed were the cedars (junipers) damaged by a lightning hit.

Infesting the shade was a plethora of small privets, bush honeysuckle, and the obligatory eastern poison ivy. Most were cut and treated.

Revealed were many beneficial natives like cherry laurel (pictured below) and Eve’s necklace that has been languishing in the invasive overrun.

A huge pile of cut brush from an area scarcely bigger than a living room. 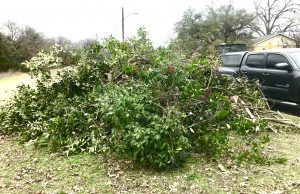 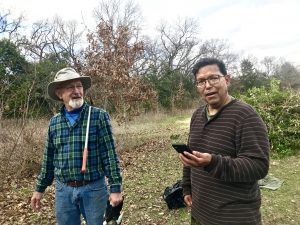 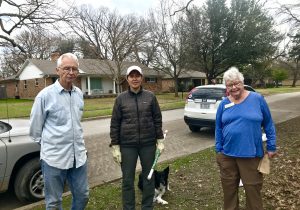 Afterward, beautyberry, coralberry, and snailseed vine berries were scattered in the shady area. The goal is to make this triangle particularly attractive to birds while ensuring better health for the esteemed large trees.

The Rhythms of Deep Time